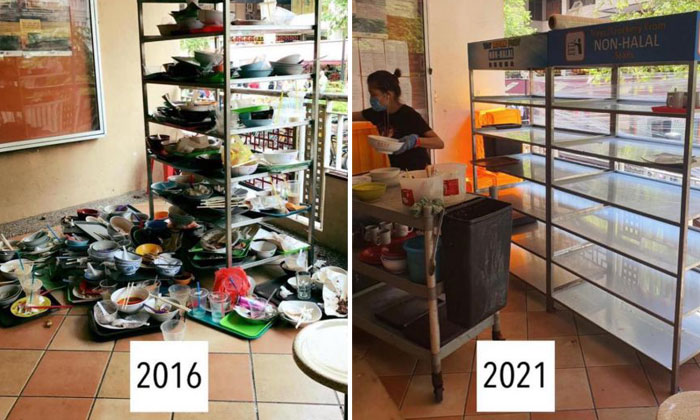 A photo circulating on social media of a full tray-return rack with trays placed on the ground of a hawker centre was taken in 2016, and the situation there has improved greatly since, said the National Environment Agency (NEA) on Friday (June 25).

It included a before-and-after photo comparison of the same tray-return station at the Albert Centre Market and Food Centre in Queen Street, in 2016 and in 2021, showing how the capacity of the station has doubled since.

The 2016 photo resurfaced recently on Facebook. It was originally uploaded by a Facebook user in 2016 with the caption: "Return your tray seems more an excuse to understaff."

On Friday, NEA said in a Facebook post that the same area at the hawker centre has made a "dramatic transformation" between 2016 and 2021.

"Better tray-return infrastructure and a new cleaning workflow are initiatives we've adopted in consultation with our stakeholders, to ensure cleaner and safer public dining places," it said.

It added that diners and cleaners at hawker centres have played "a great part" in making the tray-return system work.

"If we all take responsibility in cleaning up after we eat, our cleaners can focus on general cleanliness, including wiping and sanitising tables, as well as clearing and sorting dirty crockery at designated tray and crockery return points," NEA said.

It urged the public to clear their own tables by returning their food trays and throwing away used tissues to keep hawker centres clean and safe.

The circulation of the 2016 photo online comes as new laws are about to kick in, making it mandatory for diners to return their trays and clear table litter from June 1.

To help diners adjust, no enforcement action will be taken until after Aug 31. Instead, they will only be advised to follow the rule.

Under the new rule, first-time offenders who do not comply will be given a written warning.

Second-time offenders will face a $300 composition fine, while subsequent offences may result in court fines, which can go up to $2,000 for the first conviction.

As at Monday, more than 4,500 diners have been reminded to return their trays.

The Singapore Food Agency will work with NEA to roll out enforcement progressively at coffee shops and foodcourts in the fourth quarter of this year.

NEA is also working with industry stakeholders, such as cleaning companies, to relook the table cleaning workflow for cleaners.

Instead of clearing dirty trays and food remnants from tables, cleaners will soon focus on cleaning and sanitising tables as well as managing the tray-return stations.

Seventy-five more tray return stations will also be set up at hawker centres, on top of the existing 900 available now.