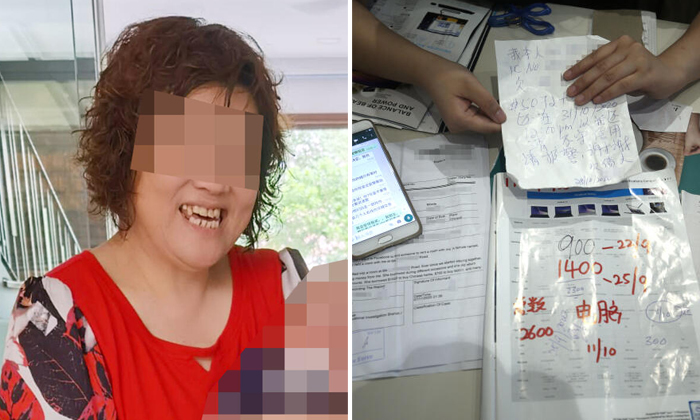 A confinement nanny who drew infamy for agreeing to do confinement for four different mothers — all of whom were due in the same month — has been embroiled in more controversy.

It was earlier reported that the confinement nanny had accepted deposits from four different mothers who were all expected to give birth in November.

Another confinement lady also posted online about how she had covered five days of confinement for the nanny but was still owed $500 for the work.

According to Lianhe Wanbao, another woman has now come forward to identity herself as the ex-roommate of the confinement nanny and said she fell victim to her too.

The woman, who declined to be named, is in her 20s and from Malaysia.

In July this year, she came across an advertisement by the nanny in a Facebook group. The nanny was looking for someone to co-rent a room in Sembawang.

The roommate recounted: "When I messaged her privately, she said that the rent was only $650 for a room as the landlord was her friend.

"I was satisfied with the room after looking at it and agreed to share the lease, and moved in with her on August 15."

Within two days of knowing each other, the nanny asked to borrow $600 from her.

The nanny also claimed to know many wholesalers, which allowed her to buy computers and medicinal herbs at cheap prices.

The roommate shared: "Wanting to save money, I paid her $1,250 for a MacBook and $138 for Bak Foong pills in September. However, I have yet to receive the items."

Additionally, the nanny borrowed $6,094 from her roommate across four occasions.

"She said that her friend had asked to buy a computer and she needed the money to 'import' the goods before reselling it to her friend at a higher price," added the roommate.

"She also promised that as long as I lent her the money, she would give me hundred dollars worth of kopi money."

In October, the nanny claimed that she had lobang to make a quick buck from selling underwear. She persuaded her roommate to make an investment and get the goods from her.

The roommate said: "Initially, I only got 30 pieces of underwear from her to test the waters.

"She then introduced to me someone who ordered 203 sets of underwear worth over $4,000 at one go. I was very excited and immediately transferred money to her to place an order."

However, following the money transfer, the high-roller suddenly cancelled the order.

Left with no money and no goods, the roommate finally realised what had happened and made a police report.

The roommate, who is studying and working part-time, said she does not earn much at her factory job and that the $10,000 she lost is her hard-earned money.

She told Wanbao: "After I moved out, I didn't know how to recover the money and could only keep texting the nanny. However, she said that I was harassing her and threatened to get a laywer to sue me.

"The thought of not getting my money back and being embroiled in a lawsuit has left me feeling like a mess."

According to the roommate, the nanny had revealed to her that she actually did not have any confinement experience and even told her "you can be a confinement nanny as long as you can cook."

The roommate said: "I have seen her appearing to be hard at work in the room all day and texting pregnant women. She even said she would order medicinal herbs from Malaysia.

"She said she had been working as a cooking stall assistant in Bedok but her boss was unwilling to help extend her work permit due to Covid-19, which caused her to lose her job.

"I thought that we are all from the same hometown and should help each other, so I lent her money whenever she needed it."

When contacted by Wanbao, the nanny lamented that the reports about her have affected her badly and made her a 'public enemy'.

She said: "Regarding the pregnant women, I admit that I was negligent for not explaining properly. I will personally do confinement for one of them. I will find nannies for the other three and draw a small commission."

"I have my difficulties. I don't even dare to go out now because people point at me like I'm a street rat. I cannot find a job and no one dares to hire me. Without any income, how can I pay back the money?

She also claimed that the actual sum she owes her ex-roommate is around $5,000 and not $10,000, but declined to share more details.

The nanny said: "I will find a job to pay back the money, so I hope everyone will spare me. I am under a lot of pressure!"

Related Stories
Nanny agrees to do confinement for 4 pregnant mums -- but they are all due in November
Former actor Joshua Ang on how baby son ended up in ICU allegedly due to negligent nanny
Joshua Ang's nanny nightmare makes parents wonder: Can you trust a stranger to care for your baby?
More About:
baby
scam
controversial