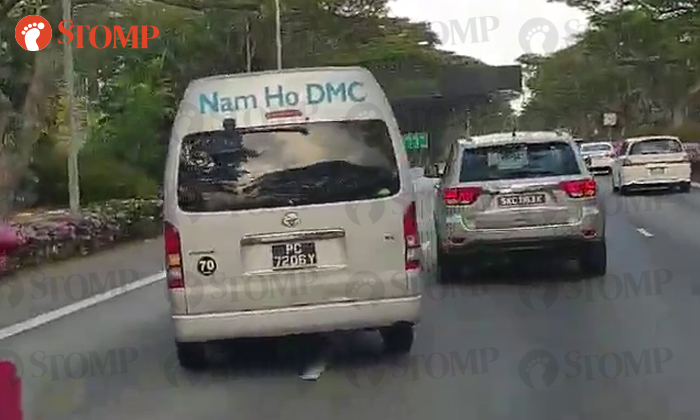 A new video of a road dispute between a van driver and a car driver shows how there is more to the story than what was reported by the latter.

Stomper Lilo & Stitch, who witnessed the incident, said it occurred along the East Coast Parkway (ECP) towards Changi Airport on March 2, at around 5.30pm.

A Facebook video posted by Beh Chia Lor - Singapore Road on March 7 shows a van with a 'Nam Ho DMC' decal travelling at high speed and cutting into a car driver's lane.

The two then got into a road dispute, with the van swerving towards the car and causing a collision.

The video was credited to a netizen known only as 'Repo,' who is believed to be the car driver.

In the comments section of the video, Nam Ho Destination Management Company (DMC) apologised for the van driver's misdeed and said that it would take disciplinary action against him.

However, many netizens called out the car driver for editing the video to make himself 'look innocent' and said it was one-sided.

And it looks like that is certainly the case, judging from a new video that Stomper Lilo & Stitch sent to Stomp on Tuesday (March 12).

Lilo & Stitch told Stomp that he was travelling as a passenger in his friend's car when he witnessed the road dispute.

Dashcam footage that the Stomper shared shows the car driver repeatedly trying to block the van driver by cutting into his lane.

Stomper Lilo & Stitch said: "My friend was honking as the van driver overtook us and suddenly slowed down due to the car blocking him.

"As seen in the video, the car driver then followed the van driver by making a last-minute turn into the Bayshore Road exit.

"I have no idea what happened afterwards but while the van driver was travelling at high speed and overtaking a few vehicles, the car driver is also to blame."