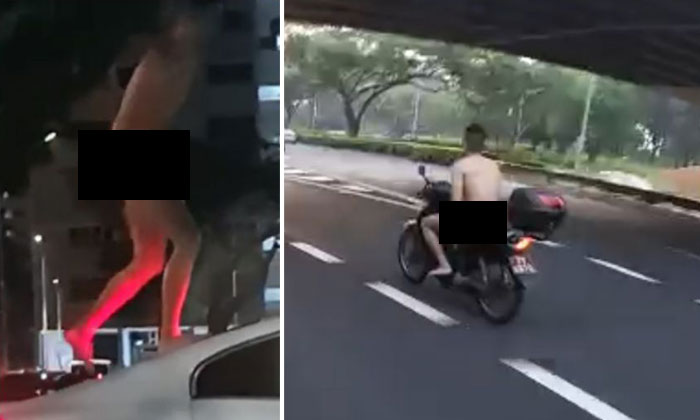 The man caught naked on several video clips this week, including while riding a motorcycle, was charged on Saturday (June 12).

Yeo Qi Wei, 24, faced one charge of appearing nude in a public place.

He is alleged to have appeared nude at the open-space carpark of Block 212 Lorong 8 Toa Payoh on June 10 at about 5.45am.

District Judge Ronald Gwee ordered that Yeo be remanded at the Institute of Mental Health for two weeks for psychiatric observation.

The police told The Straits Times on Friday that a man had been arrested and was being investigated for other offences, including public nuisance, performing an obscene act in public, trespass and traffic violations, in separate incidents reported.

Interest in the incident followed the circulation of a photo on June 10. It showed a naked man on a motorcycle at a cross junction in Eunos.

A video clip of the man also began circulating the same day, showing him riding nude on a motorcycle along the Pan Island Expressway at about 100kmh.

A second clip later surfaced, showing him climbing on top of a car while naked.

The driver of the car could be seen coming out from his vehicle and making a call while looking at the man, who later walked off.

Yeo's case is expected to be mentioned again on June 25.

If convicted of appearing nude in a public place, he may be jailed for up to three months, or fined up to $2,000, or both.