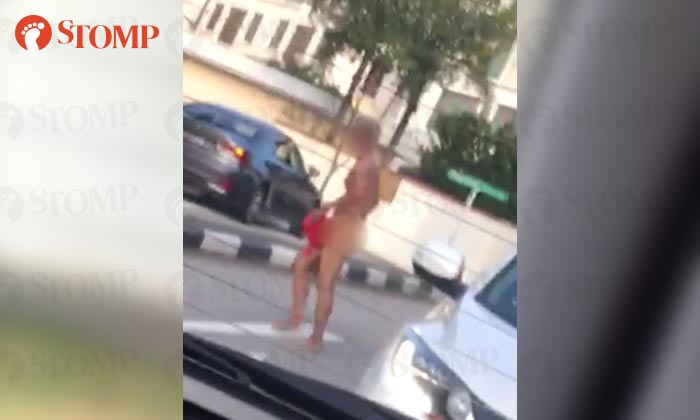 Stomper Larry was driving away from his mother's home at Pavilion Park in Bukit Batok when his son alerted him to a naked man.

He shared a video with Stomp of the incident that happened on Thursday (July 18) at about 6.20pm.

In the video, the man, who is naked, is holding a red cloth to cover the front of his private parts while leaving his behind exposed.

He nears the roadside and raises his hand as he crosses the road to the opposite side.

Larry told Stomp: "I was quite shocked, I thought whether he was sabotaged by someone, who took his clothing, leaving him with only a piece of red cloth for some covering.

"I heard from my mother's neighbour, who walks her dog in the neighbourhood every day, that she has never seen this man before and doesn't think that he lives in the area.

"Then again, my son said the guy was rather polite, putting up his hand while crossing the road."

In response to Stomp queries, the police said: "On July 18 at 6.25pm, the police received a call for assistance along Bukit Batok Road.

"A 49-year-old man was arrested for appearing nude in public place and for suspected drug-related offence.