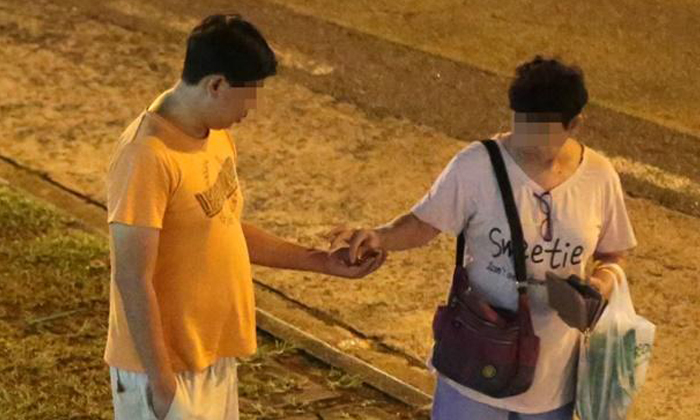 An able-bodied man has been seen asking passers-by in Yishun for $1 for the past two months, leaving people to wonder why he is doing so.

Mr Jiang, 40, told Shin Min Daily News that he started seeing the man at Block 701 Yishun Avenue 5 a couple of months ago.

"He is often at the bus stop or void deck, where it tends to be crowded, asking people for a dollar," said Mr Jiang.

According to Mr Jiang, the middle-aged man is believed to be around 30 to 40 years old. He is around 1.8 metres tall and is described as decent-looking.

Added Mr Jiang: "My mother and I gave him $1 before, but later realised that he is here almost every day, so we stopped giving him money.

"My mum also started taking a detour to avoid him."

A resident nearby, Mdm Du, revealed that the man would ask her for $1 every time she passed by the bus stop.

"He has both hands and feet, and isn't handicapped. So I don't understand why he is doing this instead of working," added the 80-year-old retiree.

Another 70-year-old female resident, who declined to named, said: "Previously, I saw him looking pitiful and gave him $2. But he asks for money daily and I don't have so much to give."

When reporters visited the scene, they saw the man approaching nearly every passer-by.

Although there were many people who stopped in the span of 15 minutes, only one woman gave him money.

Upon being approached by reporters, the man turned away and left without a word.

Even more strangely was how a stall vendor in the area said: "I heard that his family would drive him to Yishun in a BMW every afternoon and pick him up in the evening, so I don't understand why he needs money."

She believes that the man has family and lives in Woodlands , but is unclear about his situation.