My, my, what big teeth you have: Huge crocodile spotted at Sungei Buloh 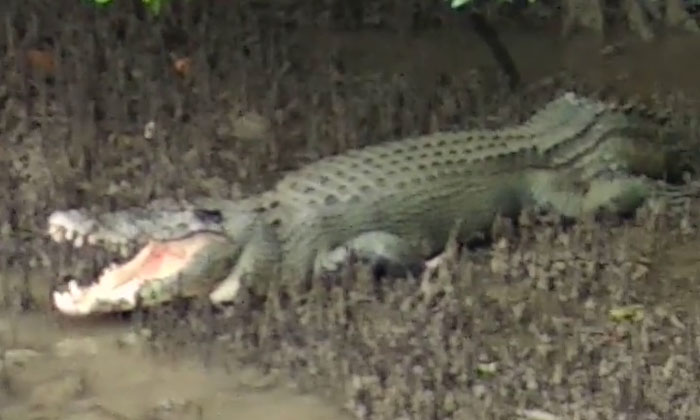 If you have ever visited Sungei Buloh Wetland Reserve, you will know that several crocodiles inhabit the brackish and freshwater areas of the wetland.

Despite this, sightings of these reptiles still excite people who visit the park.

Facebook user Ken Lee posted a video of a crocodile basking on a bank with its mouth wide open, showing off its teeth.

Stomp spoke to Ken's daughter, Dilys who said that she had visited the park with her father on July 14  when she saw the crocodile.

Being a regular visitor to Sungei Buloh, it was not the first time Dilys has seen a crocodile.

However, she told Stomp that usually, she sees them swimming in the water.

"This is the first time I saw the crocodile out of the water," she said.

"It looked very fake as it remained completely still and it seemed like it didn't have any tail."

She said that she and her father were alerted to the crocodile by a couple of amateur photographers in front of them.

"They called my dad to come and look at it," Dilys said.

"It was the first time I saw a human traffic jam on that bridge as the crocodile attracted a lot of attention from visitors to the park."

According to NParks, estuarine crocodiles are usually found in the water or at the mudflats away from visitor routes at Sungei Buloh.

Warning signs and advisory notices have been posted at areas where these animals are most often seen.

Should you encounter a crocodile, here is what you should do: