Mum who threw newborn into rubbish chute cleaned up blood, bathed and went to sleep 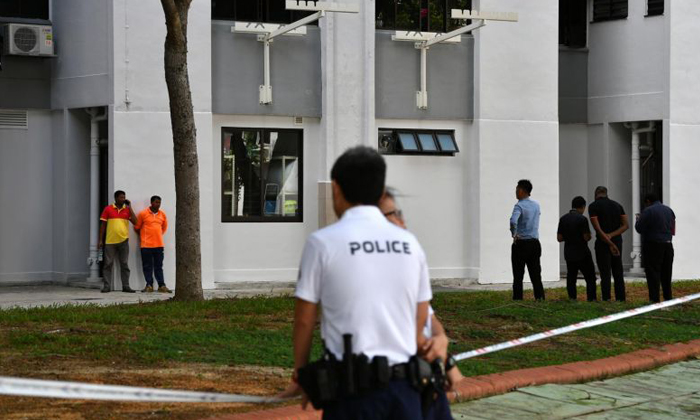 A woman, who pleaded guilty to throwing her newborn son into a rubbish chute with the intention of killing him, was given an 18-month jail term on Tuesday (Aug 18).

The court heard that the 27-year-old Singaporean woman gave birth in the toilet of her flat on Jan 7, placed the baby in a plastic bag, and tossed him down the rubbish chute from the third floor of a Housing Board block in Bedok North. She did it at about 6.15am.

The mother, who cannot be named because of a gag order to protect the baby's identity, claimed that before giving birth, she did not know she was pregnant.

The baby was found more than two hours later by two town council cleaners working at the block of flats.

The baby suffered minor injuries and is in foster care.

There was no mention of the baby's father in court documents.

The prosecution had called for the woman to be given at least two years' jail but her lawyer, Ms Arias Lim from K&L Gates Straits Law LLC, argued for a "human touch" in what she said was an unusual case since the baby survived and the woman has since tried - unsuccessfully - to contact her child through the Ministry of Social and Family Development.

Ms Lim further said her client acted out of shock, as in that one moment, she went from being a young, single woman to being a mother.

A part-time waitress and cleaner at the time, she felt pain in her abdomen and went to the toilet on Jan 7 morning.

Although she had not had her menstrual cycle for many months and wondered if she was pregnant, she chose not to "dwell on it further", the court heard. Her family was also unaware that she was pregnant.

After she threw out the baby, she cleaned up the blood in the house, took a shower and went back to sleep.

The cleaners heard the cries of an infant coming from a white plastic bag.

A property officer from the town council arrived, tore open the bag tied in a dead knot and found the crying baby covered in blood.

The baby was taken to KK Women's and Children's Hospital where he was diagnosed with a fractured clavicle, which a doctor said could be traced to a birth injury.

Police went door to door at the block the next day, but the mother denied knowing anything about the case.

On Feb 9, the police told her they wanted to interview her and do a DNA test. She was asked to report to the police station on Feb 14 but on the eve of the appointment, she turned herself in.

A psychiatrist from the Institute of Mental Health found she was not suffering from a major mental illness at the time of the offence.

This assessment was among reasons that led Deputy Public Prosecutor Yan Jiakang to argue the woman was cognisant enough to clean up after herself.

District Judge Salina Ishak, during sentencing, noted the woman had pleaded guilty, but said rehabilitation did not displace deterrence and a probation order was not appropriate.

She also took into account the baby's vulnerability and that he was thrown from a height into a dangerous and unsanitary environment.