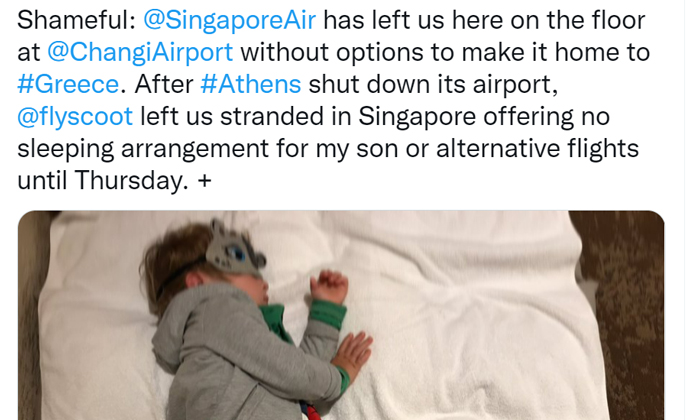 Storm in a teacup? It was more of a snowstorm in Greece, felt all the way here in Singapore.

A passenger flying to Athens took to Twitter to complain that she, her partner and their toddler were given no option but to sleep on the floor at Changi Airport after their Scoot flight was cancelled because of heavy snow in the Greek capital.

They could not leave the airport here because of Covid-19 restrictions. And they were initially told that airport hotels were full.

“Shame on you,” Ms Irene Caselli, who described herself as a journalist covering early childhood, told Scoot, and its parent company Singapore Airlines, in one of her tweets.

In an update a few hours later, she said they had a hotel room, “after making a big fuss here and calling the Italian embassy”.

It is never easy to be stranded at an airport, especially with a young child, but if this passenger was looking for sympathy, it looked like there wasn’t much of it on offer, online at least.

Most of those commenting on her tweet felt she should have known better and many felt her behaviour was self-entitled or “going full Karen on everyone” as one put it.

This was one comment: “Why is this Singapore Airline's fault? She bought a budget airline ticket and expects to be treated like a princess?”

And this was another: “You decided to fly in the midst of COVID with a kid on budget airlines. You paid for a budget ticket, but demand a full fare service. You should not omit that detail, many reading this won't know Scoot is a budget airline.”

Comparisons were made: “Imagine taking a Ryanair or Easyjet flight and expecting them to book a hotel room for you when a flight is cancelled…”

And the comparisons were not just with the airline, with one asking: “Can you imagine if it was other airports?”

Another said: “I can think of worst (sic) places to sleep than Changi Airport.”

Incidentally, if you Google "best airport to sleep in" every one of the top sites that come up lists Changi as No.1. Among them is the World Economic Forum, quoting The Guide to Sleeping in Airports.

There were those who felt she was using social media to put pressure on the airline.

“Obviously a terrible situation but (it) seemed clear the individual who posted this wanted help by aggressively calling out some businesses.”

Some did sympathise with the woman. But even among those, there were those who argued that she need not have pointed fingers or called out the airlines as shameful.

“I think you should calm down and take a deep breath before making the situation worse. Most of the negative comments have some truth in it. You might want to think about it.”

And another said: “Look, it's a shame this happened at all. We do pity the plight of the family. But dumping responsibility on someone/something else is very immature and reeks of self-entitlement.”

Scoot said it had reached out to affected passengers after its TR722 Singapore-Athens-Berlin flight had to be cancelled on Tuesday (Jan 25)  because of bad weather.

And SIA tweeted later: “Hi Irene, we seek your understanding that the airport hotels were fully booked yesterday. We note that @Flyscoot has reached out to you and assisted with booking a hotel room as one has just been made available.”