Mum finds 6 welts on son and says school did not inform her of caning, police investigating 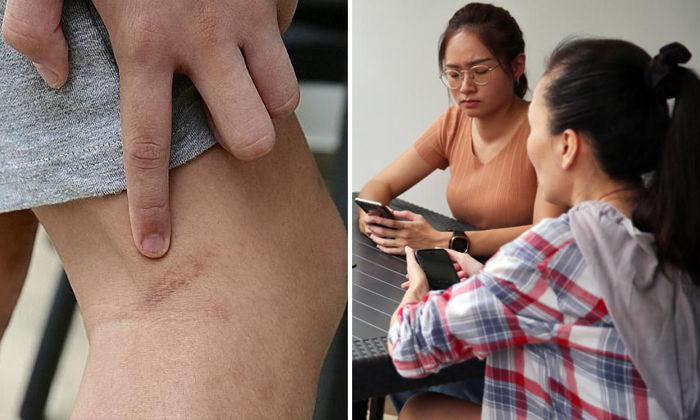 A woman has made a police report against a primary school, after discovering six welts on her 12-year-old son's arms and legs.

The housewife, who filed the report after discovering the cane marks on her son on Tuesday, alleged that the school had caned him without first informing her or her husband.

When contacted, the police told The New Paper that they were alerted to a case of "voluntarily causing hurt" in Lorong Chuan on Tuesday at 11am. Investigations are ongoing.

According to schoolbag.sg, a Ministry of Education (MOE) website, should caning be decided as punishment for a child, his parents are always informed in advance.

Under the Education (Schools) Regulations, corporal punishment can be inflicted by the principal only or under his express authority.

Such punishment, carried out with a light cane on the palms of the hands or on the buttocks over clothing, is done in private, and with counselling and follow-up guidance.

Mrs Claire Chee, 48, said her husband had discovered the welts on their son's arms and legs.

The couple had gone to school after receiving a phone call from the school about their son getting into a fight.

She told TNP yesterday: "When I arrived at the school, I spoke to my son's form teacher and the discipline master first, and neither mentioned that my son had been caned.

"Later, when we were about to take my son home, my husband noticed the marks on his arms and legs."

She claimed that when she confronted the discipline master about the marks, the teacher insisted that she "merely tapped the boys to warn them".

Mrs Chee said: "I was so heartbroken and angry that my mind was a blank. Even I do not use a cane on my children."

She added: "I would have been less upset if they had told me beforehand, so I could have had time to mentally prepare myself to see the wounds."

Mrs Chee said the welts on her son were still visible with three cane marks on his right arm, two on his left and one on the back of his leg.

According to her, her son had got into trouble because he had kicked a schoolmate's bag, after the boy had allegedly scratched him a few weeks prior. The boy retaliated by kicking the water bottle her son was holding. The two then became aggressive.

Mrs Chee claimed that in the days since the incident, her son - who will be taking his Primary School Leaving Examination (PSLE) in about a month, appeared to be in shock, and he would cry when she tried to get him to return to school.

Shin Min Daily News reported that the police took away a rattan cane, measuring about a metre long, as evidence.

An MOE spokesman told TNP that it was aware of the complaint but was unable to comment on it as the police are investigating.

"MOE provides schools with guidelines to formulate their discipline policies and school rules.

"In deciding the best approach for each student, schools will consider the circumstances of the case, including the age of the student, severity of the student's actions, and whether offences have been repeated."

TNP reached out to the primary school yesterday but did not get any reply.