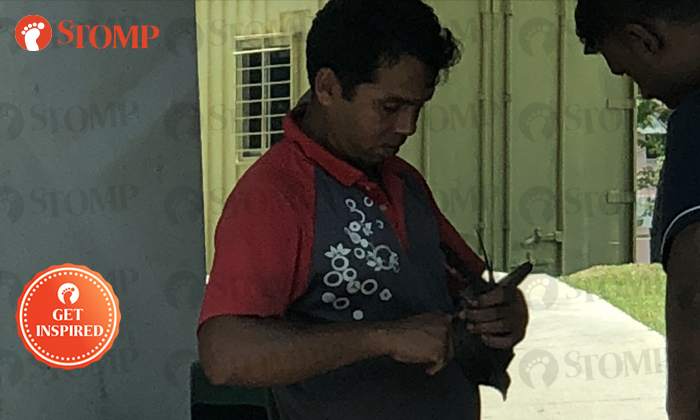 Seeing a pigeon struggling with a fishing line that was tied to its leg, a man went to its rescue.

When he freed the bird, it was to the cheers of Stomper Wang and her five children.

Wang told Stomp that the heartwarming incident occurred near Block 960 Jurong West Street 92 on Monday (March 18), at around 1.50pm.

The Stomper, who lives in the vicinity, recounted: "My kids and I were waiting for our helper to return to the car while she went to buy some stuff.

"While waiting, we spotted a pigeon with some sort of fishing line tied to its leg. We could see that it was struggling.

"At the same time, we spotted a cleaner stopping his bin vehicle and calmly walking towards the pigeon. He then grabbed the pigeon and started untying the line."

Wang said that her eight-year-old son offered the cleaner a pair or scissors, but the latter shook his head to signal that he did not need it.

"He tried and tried until he removed the line fully," added the Stomper.

"When he released the pigeon, the whole car of us cheered.

"My kids and I were so touched by his kind act. They kept asking me to take photos of him and post them on Facebook.

"However, I thought of a better platform to share this cleaner's wonderful actions: Stomp."

Wang also praised the cleaner for "wholeheartedly" helping the helpless animal even though it was not his duty to do so.

She added: "He didn’t give up despite having to take some time to help free the pigeon. He really deserves being recognised!"