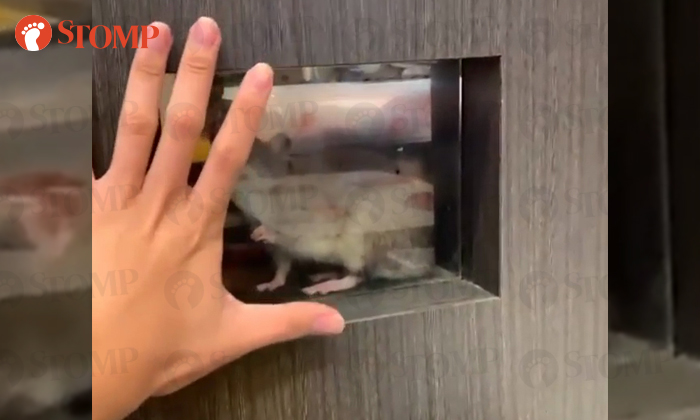 A man spotted rats, which he said were as huge as his fist, at a restaurant at Woodlands Civic Centre on late Sunday night (Sep 27).

Stomper Poh was dining at McDonald's when he noticed several rats at neighbouring dining establishment Lerk Thai Restaurant at around 11.45pm.

He told Stomp: "Multiple big rats as huge as an adult male fist were seen feasting in the restaurant. I spotted three of them but there were possibly more.

"My friend told me he saw a huge rat running into the restaurant too.

"This is very unhygienic and shows a lack of proper measures to keep rats away from the food."

Poh, who shared a video that compared the size of the rat to his hand, said he informed a manager at McDonald's about the rodents.

Responding to a Stomp query, a spokesman for Lerk Thai Restaurant said: "We would like to inform that the authorities were also informed about the infestation and an inspection was carried out on September 28.

"A second inspection, conducted with the authorities and Woodlands Civic Centre's building management, was again carried out on September 30.

"We would like to assure Stomp as well as the reader that good housekeeping of our restaurant is our utmost priority."

The spokesman also said that Lerk Thai Restaurant practices regular pest control checks and treatment, which has been increased from once monthly to twice monthly since August 2020.

"Aside to this, Lerk Thai Restaurant will extend our full cooperation to the authorities and Woodlands Civic Centre to fight against the infestation situation," he added.