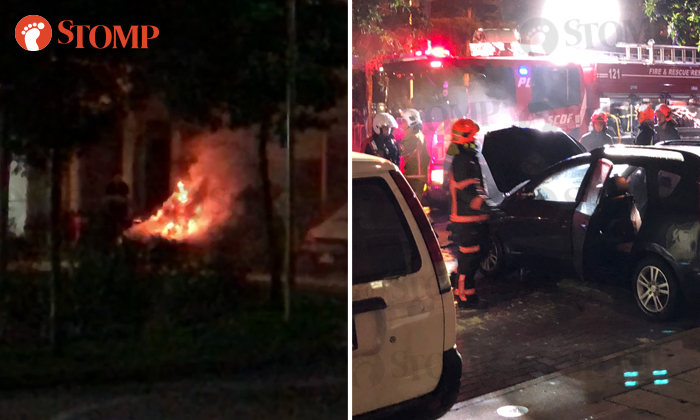 A car caught fire at the carpark of Block 75D Redhill Road in Bukit Merah yesterday night (April 9), at around 8.50pm.

Stomper Oscar, who was at the scene, contributed photos and videos showing flames engulfing the vehicle.

He recounted what happened: "At 8.53pm, the Hyundai vehicle started smoking.

"At 8.58pm, a Red Rhino arrived to put out the flames. Firefighters tried to open up the car hood as flames kept reappearing after they attempted to extinguish the fire.

"At 9.08pm, the situation was under control and flames was put out."

In response to a Stomp query, the SCDF said it was alerted to the vehicle fire at about 8.50pm.

It was extinguished by the SCDF using a hose reel, a fire extinguisher and air foam compressed backpack."

"There were no reported injuries," the SCDF told Stomp.