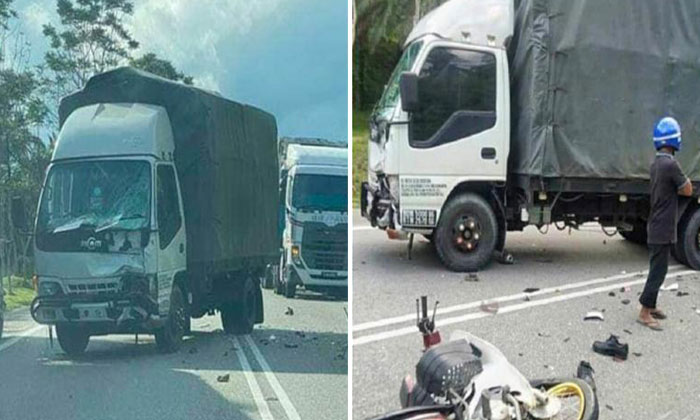 When an ambulance driver in Terengganu, Malaysia, responded to a road accident on Sunday (Nov 6), he was shocked to recognize the victim’s motorcycle at the scene.

Sungai Tong Health Clinic ambulance driver, Mohd Taqwa Ismail, 49, was called on to pick up the victim's body and transport it to Setiu Hospital at around 4.30pm.

When he arrived, he found that the victim was his 21-year-old son, Muhammad Aiman.

Aiman had been involved in a fatal crash with a lorry in front of a palm oil factory at KM38 of Jalan Kuala Terengganu-Kota Baru. He was likely on his way home when the accident occurred.

“Only Allah knows the sorrow I felt at the time," Taqwa told the New Straits Times.

"Usually, Aiman would bring food to work, but yesterday (Nov 6) he said he wanted to have dinner at home," the father said.

Taqwa described Aiman, his second of five children, as a quiet man who was also sociable and could adapt to any situation.

He died at the scene of the crash from injuries to his head, the district's police chief deputy superintendent said.

The police chief said: "Aiman, who was riding a Honda EX5, was believed to have tried to overtake another vehicle, and crashed into the lorry coming from the opposite direction."

The driver of the lorry was not injured.

He said police were investigating the case under the Road Transport Act for causing death by reckless or dangerous driving.

Related Stories
'A miracle she didn't die': 3-year-old slept through Thai nursery massacre that left 36 dead
Duan Weiming discharged from hospital after leg amputation: 'Even if I die, I will die in my own home'
Disabled woman's son and sole caregiver dies in sleep, leaving her with $6 in bank
More About:
accident
death
heartbreaking
tragic
Malaysia
ambulance