MRT commuter argues with woman, who gets offended at being called 'da jie' 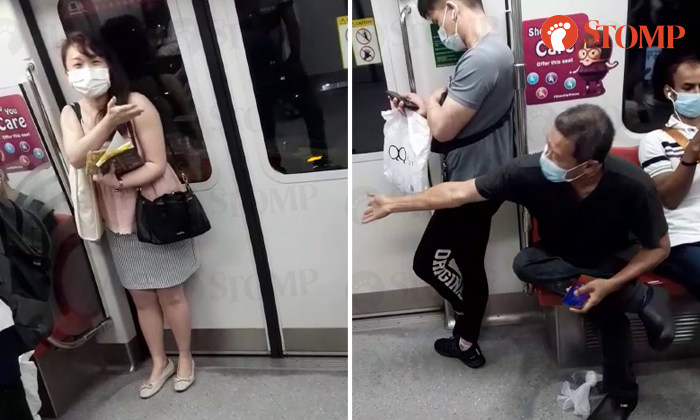 A man and a woman were spotted having an argument on an MRT train on Sunday night (Aug 7).

While the dispute was said to have originally been over an MRT seat, a slew of other issues such as age and terms of address were brought up as well.

Stomper Rizzy was travelling towards Jurong East on the North-South Line at around 10.37pm when he witnessed the quarrel. Amused, he took a video and sent it to Stomp.

Rizzy said: "The uncle was rushing for the seat, but the woman also wanted to sit. Then argue lor."

In the video, the pair appeared to be arguing over the noise level from the man's phone, which he can be seen holding in one hand while sitting on a priority seat.

Man: Why should I wear earphones?

Woman: Aiyo, you see, you said it, 'why wear earphones?'

Man: One must be yourself, why should I wear earphones?

Man: Why didn't you bring a chair here?

Man: Go home lah, go home lah. Eh, da jie (big sister), go that side, no one will disturb you.

Man: You know that I am older than you, so I have problems with my ear, you know? Right? If I call you xiao mei (little sister), you will be embarrassed.

Woman: Other people are too embarrassed to tell you to lower your volume.

Man: On the MRT, no one will care about anyone. Who cares? Who has the time to care? Too free after eating? You never take MRT before is it?

'Da jie' is a term used to address an older woman.

Rizzy told Stomp: "I like how the woman said 'Oh my god'."