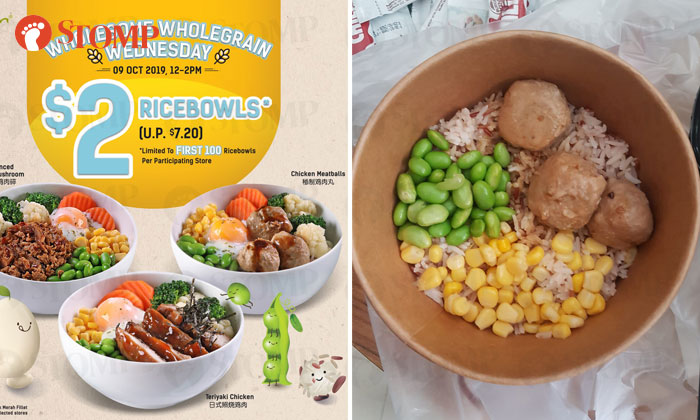 Mr Bean told Stomp that it is sorry for disappointing its customers after receiving feedback that its recent $2 Wholegrain Ricebowl Flash Sale was ill-prepared, with several people receiving ricebowls with some ingredients missing.

Customers flocked to Mr Bean outlets islandwide during lunchtime on Wednesday (Oct 8) for the two-hour promotion, including Stomper Faith, who visited the outlet at V Hotel Lavender.

"The outlet only had one small rice cooker, which took over 30 minutes to cook 10-12 serving," she told Stomp.

"I initially ordered three bowls as the promo was limited to five bowls per person.

"However, I was told I could only order one and if I wanted more, I needed to queue again.

"I was also told to wait about 30 to 40 minutes for the next cooking to be done."

She added that she did not understand the point of queueing after observing some customers had pre-ordered their meals.

In the end, another customer gave Faith a meat ball ricebowl, but it was missing some vegetables and an egg as illustrated in the outlet's publicity materials.

"Usually when I buy this item, there is more rice and it includes eggs, carrots and broccoli.

"However, you can see from my photos that the serving is pathetically small with a few missing ingredients."

"It was a lunchtime promotion so poor office workers queued for over one hour or more only to get a kid-sized portion."

Faith was not the only customer affected.

Several netizens took to Mr Bean's Facebook page to express their disappointment and frustration at how the promotion was carried out and shared how ingredients were also missing from their ricebowls. 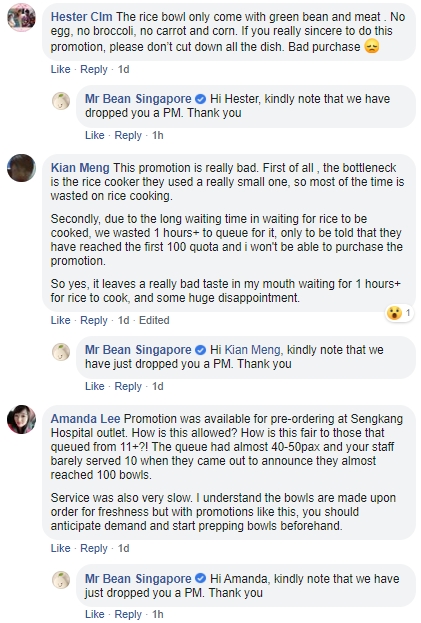 In response to a Stomp query, a spokesman from Mr Bean apologised for disappointing their customers.

She said: "It is indeed a good promotion that went wrong at some of our stores.

"Whilst we wanted to reward our customers with good deals, we ended up disappointing many who support us.

"We could have been better prepared, from rice cooking to more ingredients which we did not.

"For that, we sincerely apologise.

"We did not envisage such a success with the queues starting before the promotion begun at 12 noon. As it is on a first come first served basis, with only 100 bowls on offer, we wanted to be fair to those who queued, hence allowing them to pick up their purchases later.

"When the 100 bowls were allocated, we advised everyone in the queue that the promotion is over.

"We are currently getting in touch with those who received rice bowls with insufficient ingredients to replace them with the full offering.

"Once again, we offer our sincere apologies to all whom we have inconvenienced and disappointed."