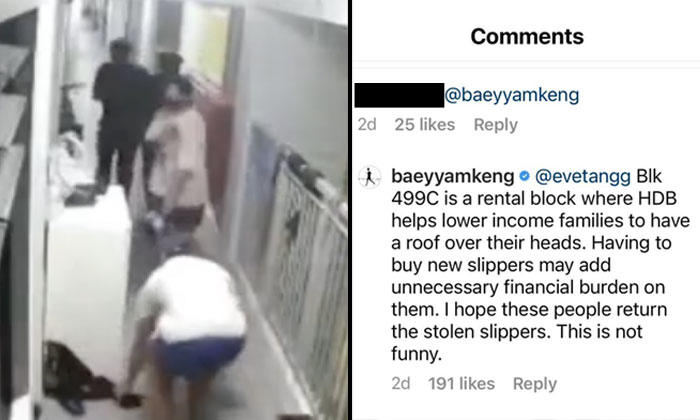 Tampines GRC MP Baey Yam Keng took to Facebook to admonish the actions of a group of youths who were caught on video taking shoes from outside a unit at Block 499C Tampines Avenue 9.

Video footage of the incident was first shared by Instagram account @sgfollowsall and shows a group of five youths taking footwear from outside a unit.

According to Shin Min Daily News, the resident discovered his footwear was missing while heading out to work.

After reviewing CCTV footage, he realised the youths had taken one pair of sandals and one slipper.

The 47-year-old resident works as a delivery driver and takes home about $1,300 a month.

Similar incidents have reportedly happened to the family about 10 times over the past year.

They have also lost two jackets.

In a comment regarding the video, Mr Baey said that Block 499C is a rental block where lower-income families stay.

I appeal to people not to play such pranks. It is not funny when lower-income families have to spend more money so...

"Having to buy new slippers may add unnecessary financial burden on them," he said.

"I hope these people return the stolen slippers.

"This is not funny."

The resident has since made a police report and the police are investigating.