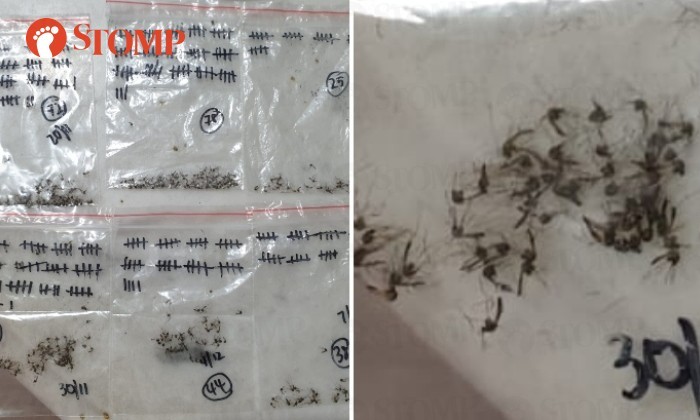 A resident at Block 509 Tampines Central 1 shared her frustrations with Stomp on Dec 7 after noticing a large number of mosquitoes in her mother's flat since she moved in in October.

By using electric swatters during hourly wipeouts, Stomper Jen managed to catch and kill 323 mosquitoes in less than a month.

She even shared that she managed to catch a "record number of 103 mosquitoes" on the week of Nov 20.

After each catch, she would keep the insect in a Ziploc bag and count the number of mosquitoes she had caught that week.

When netizens caught wind of the number of mosquitoes Jen had killed in less than a month, some were shocked while others sympathised with her situation.

One netizen even gave her two cents on how to prevent mosquitoes from entering through the windows.

NEA added that specific to the precinct where Block 509 Tampines Central 1 is located, the Gravitrap surveillance system used to catch about four to five female dengue mosquitoes in every ten Gravitraps per week.

The number caught has halved to two to three female dengue mosquitoes per ten Gravitraps per week since the initial release in May 2020.

Unfortunately, according to NEA, this is still at a level that is not low enough to prevent large dengue outbreaks.

In November 2020, there was a small dengue cluster of two cases in the area.

"To reduce the risk of dengue in the area to a low level, we therefore need to continue releasing the male Wolbachia-Aedes mosquitoes in the area, to help us achieve a 90 per cent Aedes aegypti mosquito population suppression, as experienced in other successful Project Wolbachia release areas," said NEA.

"We understand the inconvenience experienced by some residents in Project Wolbachia areas, when the male mosquitoes choose to swarm around a certain area, as experienced by the feedback provider."

NEA explained how the Project Wolbachia project team is adjusting the distribution of male mosquito releases to minimise such swarming events.

NEA also said that residents of Block 509 Tampines Central 1 may notice more male mosquitoes on Monday and Friday mornings, when the releases are carried out in this area.

Residents are also reminded to continue with the Mozzie Wipeout and to remove all sources of stagnant water in their homes.

"In response to feedback on mosquito biting in the precinct, our officers had conducted two rounds of checks in the area on Nov 24 and Dec 8, and uncovered two mosquito breeding habitats (gully trap and flower pot plate)," added the spokesman.

"NEA would like to remind residents that community vigilance and action remain critical in our fight against dengue, as the Aedes egypti mosquitoes thrive in the urban environment and the majority of mosquito breeding habitats are still found in homes.

"NEA is also working with the feedback provider to obtain mosquito samples to further investigate the matter. We will continue to work closely with Tampines Town Council on the feedback about the tree in front of her home."

Responding to Stomp's queries, a spokesman for Tampines Town Council also said that they are aware of the feedback and share the resident's concerns regarding increased sightings of mosquitoes in the estate.

"To reduce the dengue mosquito population in Tampines, the town council is working alongside NEA on Project Wolbachia where male Wolbachia-Aedes mosquitoes are released twice weekly in Tampines town around residential blocks and along the common corridors," said the spokesman.

"We would like to assure residents that the released Male Wolbachia-Aedes mosquitoes do not bite or transmit disease.

"Nevertheless, please be assured that the town council views this issue with utmost importance, and we will persist in our efforts to eradicate all mosquito breeding grounds."

The town council added that they have been proactively carrying out the following measures to tackle the dengue situation across Tampines.

They shared that they have intensified the inspections across Tampines town - from checking of drains to the roof tops to identify and remove any potential breeding mosquito habitats.

This includes the daily removal of discarded items from common areas and the removal of any stagnant waters. They have also stepped up our cleaning, desilting, and flushing of all drains where most breeding tends to occur in.

"In response to the feedback on the mosquitoes swarming around the tree in front of the feedback provider’s unit, we have arranged for the tree to undergo pruning and we will continue to work closely with NEA on the distribution of male mosquito releases," said the spokesman.

"As the fight against dengue is a collective effort between the town council and residents, we urge all residents to remain vigilant and practice the five-step Mozzie Wipeout regularly at home to protect their loved ones from dengue."

Jen told Stomp that she saw workers pruning the tree in front of her mother's flat on Monday (Dec 21) at about 2pm. 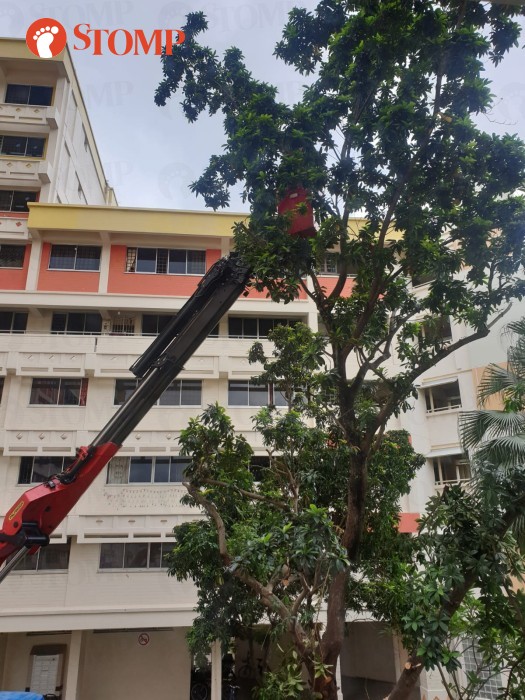 "I'm so glad that the tree is being trimmed. I hope this helps with the mosquito problem," she said.