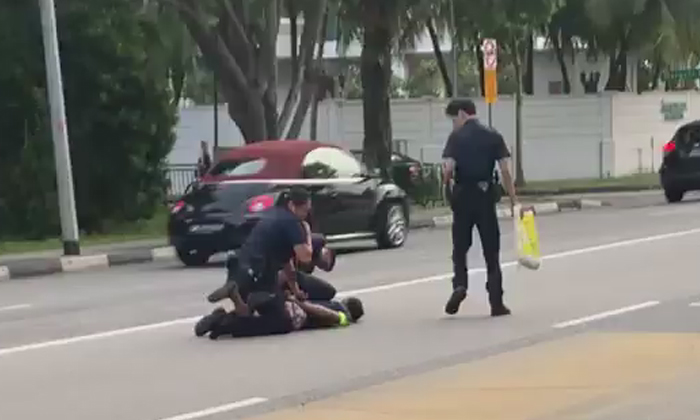 A man who was tasered by police along Mountbatten Road on Monday (May 13) had displayed erratic behaviour before being subdued by the police, a resident told Stomp.

The 51-year-old man had reportedly charged at police officers before being arrested for possessing an offensive weapon and a suspected drug-related offence.

Facebook user Shidion Tan posted a video that shows the man being pinned down by police officers and recounted what happened before authorities arrived at the scene.

When contacted by Stomp, Mr Tan said: "I have never seen the man before in this area, which is why it struck me as weird."

According to Mr Tan, the man had approached Mr Tan's domestic helper, who was in the garden, and asked for water at around 5pm.

"She worried for her safety, so she complied with his request for water, locking the gate before filling up the bottle for him and passing it back through the still-locked gate," wrote Mr Tan in his post.

He said the man was still "loitering around" at 6pm.

"[The man was] crossing the road and walking some distance away before walking back and even standing in the middle of the road, blocking some cars and, at one point, a bus," added Mr Tan, who then called the police.

"During the 10 minutes it took for the police to arrive, he walked around the stretch of the road, continuing his erratic behaviour of standing in the middle of the road and even slamming the residential rubbish bins.

"Once, he even opened the bin and appeared to throw something in before slamming the lid down hard."

Mr Tan said that the man brandished two knives when police arrived. He was then tasered and "got badly bloodied in the scuffle, leaving a pool of blood on the road".

When asked how he felt after witnessing the entire scene, Mr Tan told Stomp: "I am definitely shaken up as this is not a common occurrence for this neighbourhood.

"It also gave me immense pride in our police as not only did they arrive at the scene in a short time, they managed to subdue the man once he displayed his aggression with the knives."