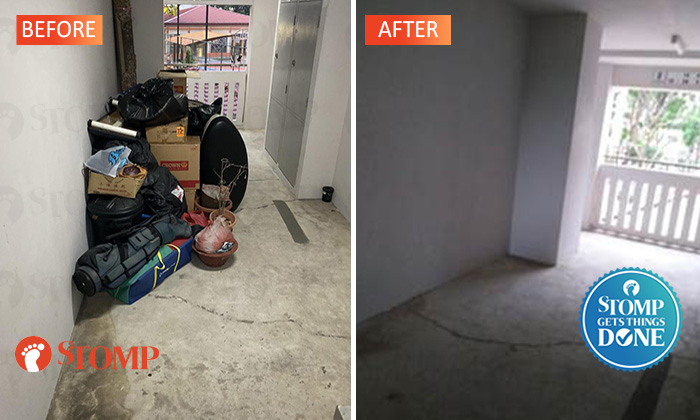 Ang Mo Kio Town Council (AMKTC) warned a resident for discarding items indiscriminately along a corridor at Block 917 Hougang Avenue 9 after another resident shared photos of the mountain of rubbish.

Stomper S said that he was concerned about it being a fire hazard.

He told Stomp previously that he first saw the mountain of rubbish on Sunday (Sep 22).

At about 10am on Wednesday (Sep 25), S saw that the items still weren't removed.

In response to a Stomp query, an AMKTC spokesperson said: "The items belonged to a resident from a unit on the second storey.

"She was clearing the things from her flat and only wanted to place these there temporarily before she discarded them.

"Our cleaner was aware that she had placed the items but he thought she wanted them.

"We have instructed our cleaner that if he encounters similar cases in future, he should let us know so that we can speak with the resident.

"Nonetheless, we have already removed all the items.

"We have also warned the resident that she should not discard items indiscriminately in the common areas as they cause obstruction and could be a fire hazard."