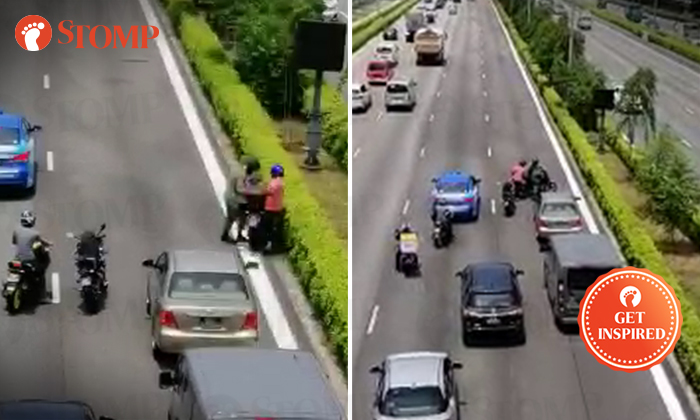 Several motorists were filmed helping a rider to the side of a road after he had apparently skidded and fell on Pan Island Expressway (PIE) on Wednesday (Oct 23).

A Stomper contributed a video of the incident and said: "I was going back to work after lunch and was on the overhead bridge near Kallang Basin Swimming Complex at about 12.45pm yesterday (Oct 23).

"I noticed this incident as I saw vehicles slowing down on the road and it seemed like there was a traffic jam.

"I didn't hear any sounds like a 'bang' or anything else but I think the motorcyclist skidded."

The Stomper added: "I saw that he had fallen onto the ground. It was so scary, my hand was shivering while I was filming the video.

"I saw some motorists help the man to the side of the road. When I saw this, it made me feel like 'hey, there are still caring people around'.

"I rushed back to work and didn't stay around, so I didn't see anything else after the motorcyclists left.

"I only saw that the motorcyclist who fell was using his phone. Thank goodness that no other vehicles ran over him."