Motorist receives $2,114 claim from SMRT Taxis but says that he didn't rear-end cab 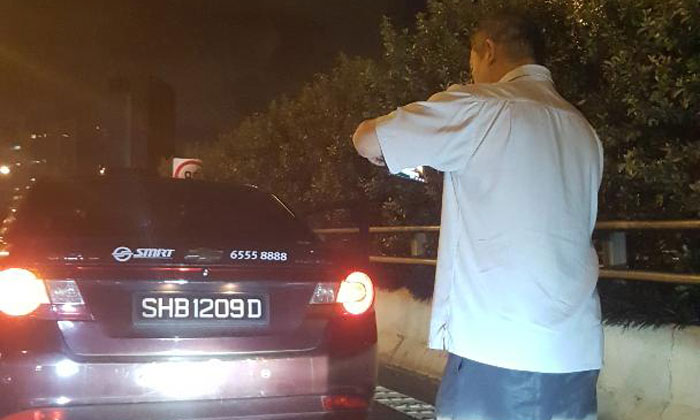 A cabby claimed to have been rear-ended by an Audi on the Central Expressway (CTE) in July but the other motorist has come out to say that no such incident took place and has posted pictures to prove his case.

In the post, Fong explains that she and her husband were on the CTE heading home when an SMRT taxi suddenly braked in front of them.

Chia, who was driving the car, managed to stop in time to avoid hitting the taxi but unfortunately, another driver ended up rear-ending them.

Chia and the driver of the Honda Stream that hit their car, Ken Ang, got out of their vehicles to settle the matter.

To their confusion, the cabby also exited his taxi and started involving himself in the conversation when his car had not been hit.

When Chia told him not to interfere, he allegedly got angry and told them that he wanted to claim insurance against Chia and Fong as well.

"All of us were very shocked at his accusation and Mr Ang immediately defended us. The taxi driver even had the cheek to claim that his passenger in his car felt the impact too and his passenger can be his witness. When my husband and Mr Ang tried to walk over to the taxi to check with the passenger, the taxi driver stopped them and said, 'you are not allowed to speak to my witness'.

"Truth is, I was seated in the front passenger seat; and when my husband stepped on the brake, I was looking ahead all the time. I swear we did not even touch the taxi one bit.

"When I spoke up, the taxi driver told me I am related to my husband, so I cannot be a witness. At this point, after witnessing how this taxi driver was trying to be a bully; Mr Ang, who is a complete stranger to us, spoke up for us and said he will be our witness if the taxi driver claimed against us."

After Chia had exchanged contact information with Ang, they tried to leave the scene but were allegedly stopped by the cabby who demanded that they give their details to him as well.

Since they did not hit his taxi, they refused.

Fong said that the cabby then threatened to call the police to which they retorted that they would make a police report as well.

She added that they did so immediately after driving off to "safeguard" themselves.

They were shocked when they received a $2,114 claim from SMRT Taxis that was sent to Chia's insurer MSIG Insurance in early October.

The claim includes $1,450 for repairs and about $429 for loss of taxi rental due to the cab being out of service for four days.

The cabby also made a claim of $240 for loss of income.

"Cost of repair $1,450? For an accident that never even happened??? For your reference, the repair cost for our car's bummer that was hit by Mr Ang's car from behind was only $250. And that is for an accident that is obvious from the pics above."

They included photos of the taxi that did not appear to have any apparent damages.

MSIG told The Straits Times that it is unable to comment as investigations are ongoing but said it takes a proactive approach to deter and detect fraud cases.