Motorist drives off after hitting dog and sending it flying, police report made 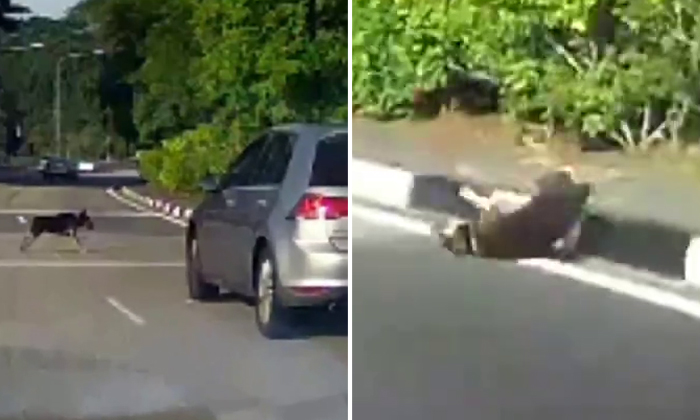 A driver was caught on camera hitting a dog with his car and allegedly leaving the scene instead of stopping to help.

The incident occurred along Portsdown Road, towards the Ayer Rajah Expressway (AYE), at around 8.45am on March 26.

A video posted on ROADS.sg's Facebook page shows how the animal had apparently "dashed across the road", leading oncoming cars to brake "except one Volkswagen Golf which unfortunately knocked the dog over".

The eyewitness who contributed the video also alleged that the Volkswagen driver "did not even slow down or stop to check on the poor dog."

She added: "Further down the road at the traffic light junction, we stopped next to his car and asked him why he did not stop to render assistance to the dog or call for help.

"His response was: 'What you want me to do? What you expect me to do?'

"When we told him it was an offence to not stop and help after knocking over a dog, he was irritated and said, 'I don't know, I don't know.'

The driver also did not make a u-turn to check on the dog as she had requested, said the eyewitness, who added that the canine "was no longer there" when she returned to the accident site.

She has reported the incident via the police's online traffic violation feedback form.

According to ROADS.sg, the dog is currently under the care of the Society for the Prevention of Cruelty to Animals (SPCA) and is being treated.

Under Section 84 of the Road Traffic Act, motorists are required to help when they hit and injure an animal. This includes horses, cattle, asses, mules, sheep, pigs, goats or dogs.

Failure to stop and help would result in a fine not exceeding $3,000, or a jail term of up to 12 months.

Related Stories
Guy calls out Honda driver for leaving dog in car at Choa Chu Kang
Driver in China drags dog on leash behind car -- then claims to be unaware of what happened
S'porean man who attacked dog in M'sia apologises, says he snapped after being attacked 6 times before
More About:
hit-and-run
accident
animal abuse
dog