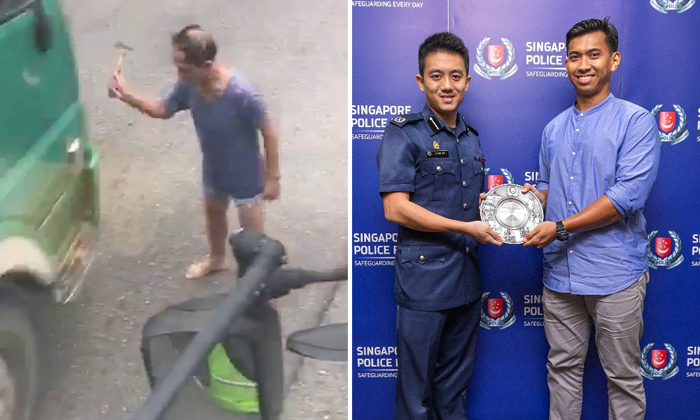 Upon witnessing the tense scene of police officers moving in to arrest a man who was wielding a hammer, a motorcyclist stopped by the roadside and rushed forward to help them subdue him.

Mr Khairil Anwar Bin Tahir was lauded for his public spiritedness in a ceremony held at Bedok Police Division on Monday (Dec 2).

Stomp had earlier published videos of the incident that occurred along Bedok North Road on Wednesday (Nov 27).

The 66-year-old man, who had been seen hitting vehicles with a hammer, was charged on Nov 28 for committing a rash act which endangers lives or the personal safety of others.

"His example reminds us that the maintenance of rule of law in Singapore involves not just the Singapore Police Force, but everyday Singaporeans too, stepping forward to work hand-in-hand with police officers to keep our community safe and secure."