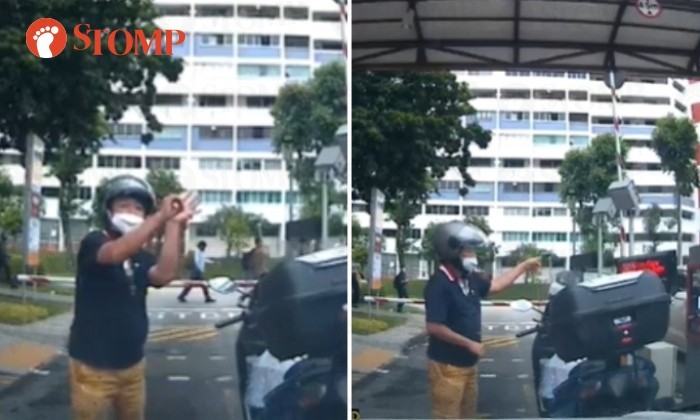 A motorcyclist who was trying to exit the carpark at Block 844 Yishun Street 81 was frustrated when there was an error at the gantry and he was unable to leave.

His exasperation grew when the driver behind him sounded the horn, causing the former to flash what appears to be a vulgar hand sign.

However, it seemed to be a miscommunication as Stomper William, the driver behind the motorcycle, shared that he only sounded his horn to help him.

The incident, which happened on Wednesday (Jan 13) at 6.34pm, was caught on William's in-car camera.

In the video, William can be heard sounding the horn. The man then gets off from his motorcycle and points towards the gantry, appearing to signal about the cash card error.

It is unclear what William did next but it led to the motorcyclist flashing him a vulgar hand sign. He then returns to his motorcycle.

"I was waiting for at least five minutes and there were about ten vehicles behind me. I saw that the motorcyclist had a cash card error and couldn't exit the carpark," William said.

"I sounded my horn, trying to tell him to press the intercom button or maybe letting him use my card first. But he just showed me the vulgar hand sign.

"He was very rude! I was only trying to help."