Motorcyclist travelling with PMD and PAB riders as 'escorts': 10 arrested for dangerous riding 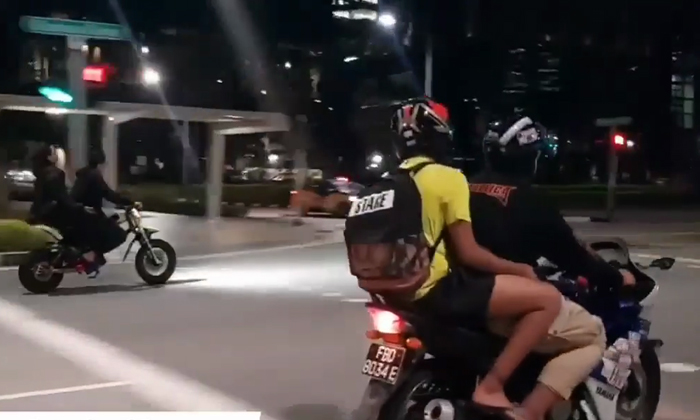 The police said they were alerted on July 13 to a video showing a group of riders on personal mobility devices (PMDs) and power-assisted bicycles (PABs) travelling together with a motorcyclist along Sheares Avenue.

In the video, the riders, which consisted of a motorcyclist and his pillion, can be seen cruising down mostly empty roads at night.

A caption accompanying the video, which has been shared more than 3,000 times, said that the motorcyclist was "enjoying" being escorted by PMD and PAB riders.

Following investigations, officers from the Traffic Police established the identities of the suspects involved and arrested them between July 17 and 20.

The ten suspects are aged between 16 and 25, police said in a statement on Monday (Aug 3).

Two PMDs, device parts of a PAB and mobile phones were seized.

The police and the Land Transport Authority (LTA) are conducting investigations into offences of dangerous riding and riding a personal mobility device on a road, amongst others.

The police also added in their statement: "All road users are advised to abide strictly with traffic rules and regulations.

"The Traffic Police and LTA will not hesitate to take tough enforcement action against road users and active mobility device users who choose to flout traffic rules and endanger the safety of others."