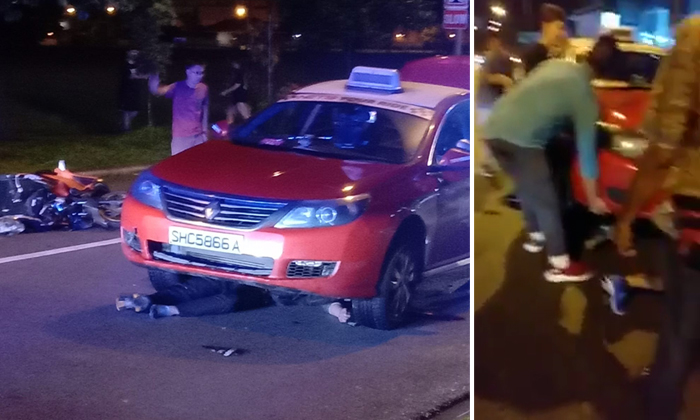 A 31-year-old motorcyclist was taken to hospital after a traffic accident that left him trapped underneath a taxi in Jurong West on Tuesday evening (June 16).

Responding to Stomp queries, the police said they were alerted to an accident involving a taxi and a motorcycle along Jurong West Street 24 towards Jurong West Avenue 3 at 8.06pm.

Several Stompers shared circulated videos and a photo showing the motorcyclist trapped underneath the Trans-Cab taxi.

In one video, several members of the public appear to be trying to lift up the taxi in hopes of freeing the motorcyclist.

A bike can be seen lying on the road.

An SCDF spokesman told Stomp that it was alerted to a road traffic accident at around 8.05pm and found a person "trapped near the front wheel of a vehicle".

The motorcyclist was conscious when taken to National University Hospital.

A Trans-Cab spokesman said it will be assisting the police with its investigations.