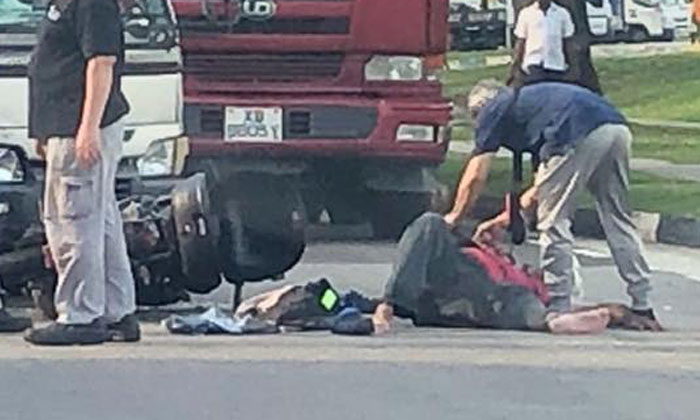 A 47-year-old motorcyclist was taken to hospital after getting hit by a lorry along Penjuru Road on Wednesday (June 6).

A video capturing the moment the motorcyclist was knocked to the ground was posted in SG Road Vigilante's Facebook group.

In the video, the motorcyclist is seen overtaking a line of vehicles.

Suddenly, a lorry turns right from a lane on the left and hits the rider.

It appears that neither saw the other vehicle coming.

Other motorists and bystanders are then seen checking on the fallen rider.

In response to Stomp media queries, a police spokesman said they were alerted to an accident involving a motorcycle and lorry along Penjuru Lane towards AYE at about 5.19pm.

"The motorcyclist, a 47-year-old man was conscious when conveyed to National University Hospital (NUH)," said the spokesman.

A Singapore Civil Defence Force (SCDF) spokesman also said they were alerted to the accident at about 5pm and that the man was conveyed to NUH.