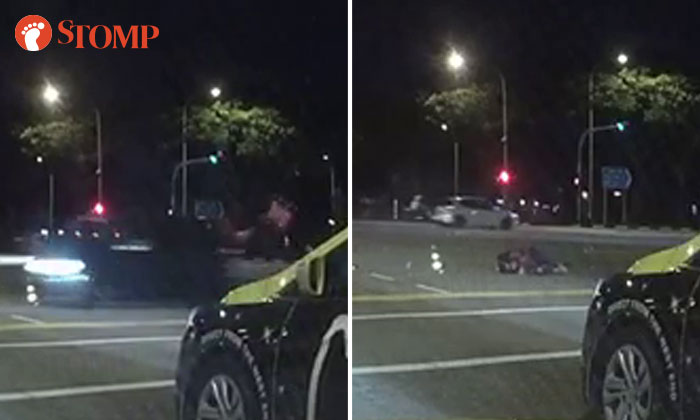 A 33-year-old motorcyclist was taken to hospital after a car crashed into him at the junction of Airport Road, Hougang Avenue 3 and Eunos Link on Monday (Jan 27).

Stomper Boey alerted Stomp to the accident and shared footage taken from his in-car camera that captured the moment of impact.

In the video, the rider is seen making a right turn when the oncoming car crashes into him.

Both the rider and his bike are sent flying following the collision.

A few people are seen rushing to the rider as he lies on the road.

"The victim is a McDonald's delivery guy," said the Stomper.

"Running towards the scene is the driver who hit the biker.

"A woman who attended to the victim happens to be a doctor."

In response to a Stomp query, the police said they were alerted to the accident at 12.30am on Monday.

"The 33-year-old motorcyclist was conscious when conveyed to Changi General Hospital," a police spokesman said.