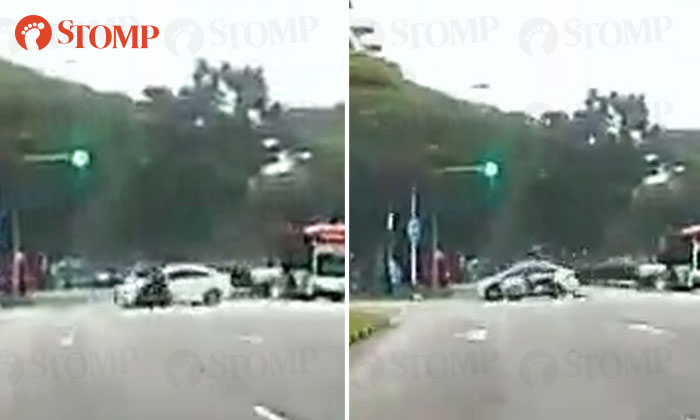 A 33-year-old rider was taken to hospital after he was sent flying in an accident at the junction of Ang Mo Kio Avenue 5 and Serangoon North Avenue 6 on Tuesday evening (Jan 8).

Stomper Sky was travelling along Ang Mo Kio Avenue 5 at around 5.59pm when he captured the incident on his car's dashboard camera.

He shared the footage with Stomp.

In the video, the motorcyclist is seen riding straight when he is hit by a white car turning right from the opposite direction.

The impact caused him to be thrown off his motorcycle. Pieces of debris could be seen flying as well.

The green light was in in the rider's favour at the time of the incident.

In response to a Stomp media query the police said they were alerted to the accident at about 6pm.

"They motorcyclist, a 33-year-old man, was conveyed conscious to Tan Tock Seng Hospital," a spokesman said.

Related Stories
Car driver and passenger taken to NUH after accident with bus at Alexandra Road
Motorcyclist in ECP crash: Video shows how he was nearly run over by another taxi
Man arrested for suspected drink-driving after accident at Hougang junction
More About:
accident
motorcyclist