Motorcyclist sent flying after getting hit by van along PIE 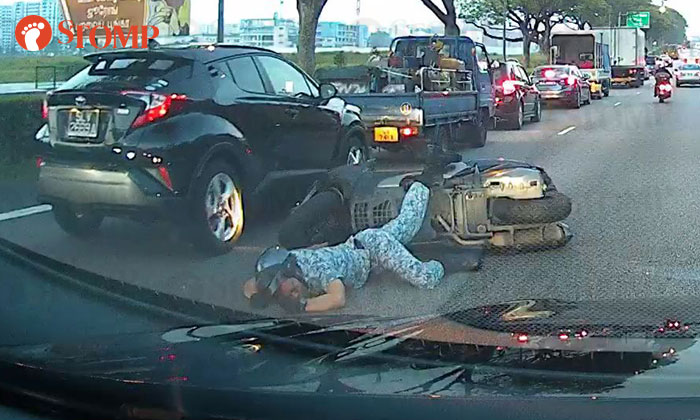 A motorcyclist was left sprawling across the road after an accident along the Pan Island Expressway (PIE) towards Tuas on Wednesday (April 4) at around 7.09am.

The incident was recorded on the dashboard camera of Stomper Rick’s car, which was on the second leftmost lane.

In the video, the motorcyclist in a Republic of Singapore Air Forces (RSAF) uniform is riding his motorcycle behind a ComfortDelGro taxi in a line of vehicles.

A van approaches the motorcyclist from the back, before crashing into him.

The collision sends the motorcyclist and his bike flying a few meters ahead into the lane Rick was on.

A man, believed to be the driver of the taxi in front of the motorcycle, then alights to render assistance to the motorcyclist.

Said Rick: "It happened quite suddenly but I couldn't stop to help.

"The taxi driver in front of the rider came out from his car to render assistance to the motorcyclist.

"On April 4, 2018, at 7.09am, the police were alerted to an accident involving a taxi, motorcycle and a van along the PIE towards Tuas.

"The motorcyclist, a 47-year-old man, was conveyed to Ng Teng Fong General Hospital for treatment.