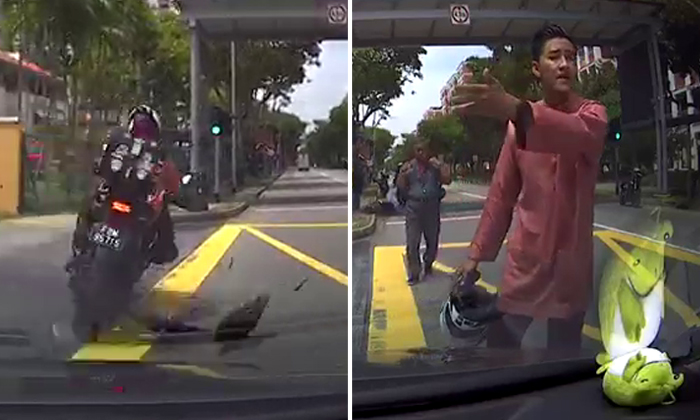 Two motorcyclists were thrown off their bikes in an accident with a car along Tampines Street 32 on May 10, leading one of them to reprimand the car driver for what happened.

Responding to a Stomp query, the police said they were alerted to the accident, which occurred towards Tampines Street 33, at 2.04pm.

One of the motorcyclists, a 47-year-old man, was conscious when taken to Changi General Hospital.

Several Stompers alerted Stomp to back- and front-view videos of the incident that have been circulating online.

According to Facebook user James who uploaded one video on the Beh Chia Lor - Singapore Road page, the car driver had signalled left to make a turn into Ngee Ann Secondary School.

However, a collision occurred when the two motorcyclists rode past the car.

Both motorcyclists can be seen falling off their bikes as a result.

One of them then gets up and walks towards the driver, and begins shouting at him

In the Facebook post which has since over 600 comments and 1,000 shares to date, James advised drivers to check their blind spots before making turns.

Related Stories
Driver exits car to confront woman after getting honked at for blocking lane at Simon Road
Cyclist falls down after bicycle wheel gets caught in grating -- then acts like it's cabby's fault
Volkswagon driver has the cheek to rage after 'inserting himself' in front of car
More About:
road rage
accident
biker
motorcyclist