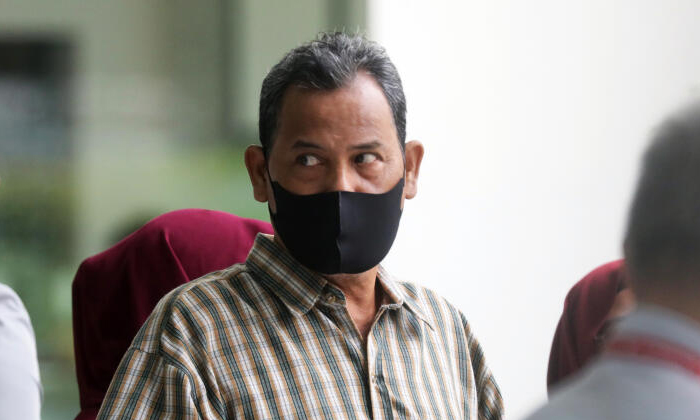 A motorcyclist punched an elderly pedestrian who uses a walking stick and was crossing the road, causing him to fall close to oncoming traffic.

The court heard that the diabetic victim was not jaywalking as the nearest pedestrian crossing was more than 50m away.

In sentencing him, District Judge Marvin Bay said it was fortunate that Mr Velu had not fallen onto the path of an oncoming car.

He added: "Mr Kassim's actions were reckless and his punching of Mr Velu in the middle of a road close to oncoming traffic demonstrated a heedlessness of the safety of a clearly infirm man of advanced age."

Shortly before the incident on Dec 5, 2020, Mr Velu got off a bus near Regentville condominium in Hougang Street 92 at around 7.20pm and started to cross the road towards the property.

He told the court: "The victim... raised his walking stick to chest level, intending to signal his presence and to convey to the accused to slow down for him. In attempting to avoid the victim, the accused lost control of his motorcycle and fell.

"At about 7.24pm, upon getting up from the road, the accused walked directly (towards) the victim, and punched the left side of the victim's face once while intending to cause hurt."

The blow caused Mr Velu to fall, close to oncoming traffic in the opposite side of the road.

Passers-by came forward and he was escorted into the condominium. One of its security guards then alerted the police.

The court heard that the condominium's closed-circuit television (CCTV) system captured the incident.

The attack left Mr Velu with pain on the left side of his face and abrasions on his right limbs. He refused to be taken to hospital.

"These claims were untrue and were contradicted by the CCTV footage of the incident," said the prosecutor.

Kassim is now out on bail of $5,000 and must surrender himself at the State Courts on May 17 to begin serving his sentence.