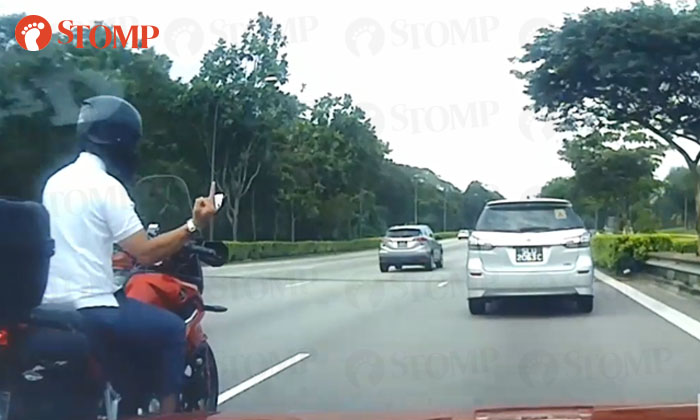 A motorcyclist pointed the middle finger at Stomper Melvin after trying to cut in front of his car on Monday (Oct 1) at 8.25am, along the Kranji Expressway (KJE) towards the Pan-Island Expressway (PIE).

Melvin told Stomp he was heading to work from Woodlands and was driving in the first lane.

According to him, there was a motorcycle at the rear of his car and a van in front of his car.

Melvin said the van had sped up a little and the motorcycle tried to cut in front of him.

"The motorcycle was trying to forcefully squeeze in between me and the van in front, but I think he picked the wrong timing and there wasn't enough space," he explained.

He said: "There were two less congested lanes, the third and fourth lanes, which he could have moved to, so I don't know why he tried to cut in front of me. It is also dangerous to be driving in between lanes in the first place.

"When he couldn't cut in front of me, he showed me the middle finger, which I think is very unfair. I didn't do anything wrong. In fact, he was the one driving recklessly."