Motorcyclist points middle finger at driver who filtered into his lane 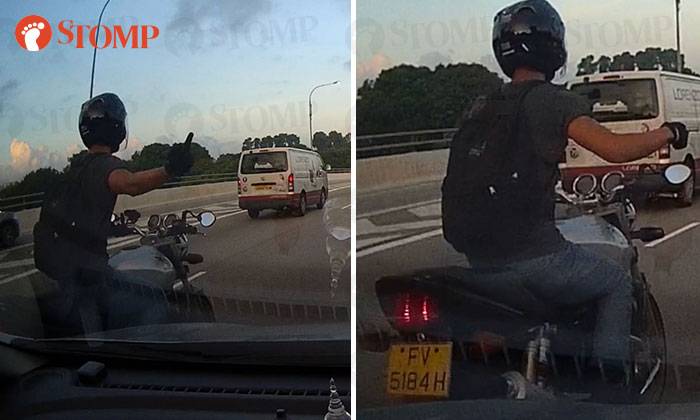 A motorcyclist suddenly overtook Stomper Kelvin’s car as he was switching lanes along the Kranji Expressway (KJE) at 7.05am on Thursday (May 10), even flashing him the finger after doing so.

The incident was captured on Kelvin’s dashboard camera, and he submitted the videos taken to Stomp.

In the video, Kevin is seen driving on the Lane 1 and attempting to filter to Lane 2.

He signals his intentions and gives way to four motorcyclists first.

The cars on Lane 2 behind him slow down to allow him to filter into the lane.

The motorcyclist suddenly speeds up, sways to the left side of Kelvin’s car and overtakes him.

He then turns to flash Kelvin a middle finger.

Stomp has compiled the videos that Kelvin took.

“This is very dangerous.

“This year there have been a lot of road traffic accidents already, and some of them were fatal.

“This kind of behaviour not only endangers riders themselves but other road users.

“I just wanted to share this to let others be aware.

“Let’s be more considerate of others.”