Motorcyclist points middle finger, argues with driver for not giving way at Yishun 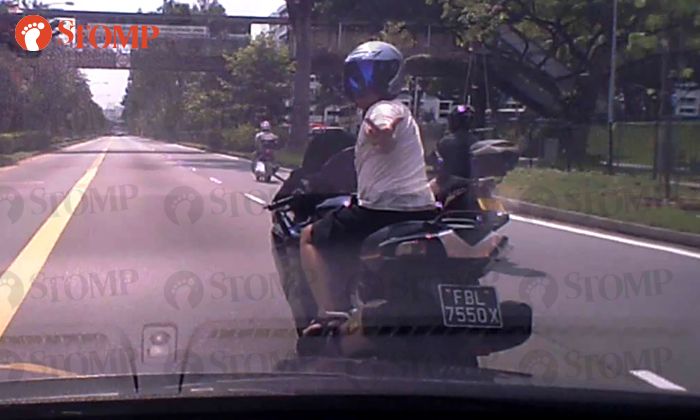 Stomper L and a motorcyclist got into an argument during a road dispute along Yishun Avenue 2 on Saturday afternoon (July 7), at around 12.40pm.

L submitted a video of the incident, which took place near Khatib MRT Station.

L told Stomp: "This road allows a maximum speed of 60km/h and there is a speed camera ahead.

"This motorcyclist was riding very fast behind me. I was changing lanes to the centre when he suddenly swerved towards my door, but did not hit it.

"He was also trying to challenge me by blowing the exhaust pipe near my door to show that his engine was very powerful. You can see everything in the video."

In the video, the biker can be seen flashing his middle finger and making angry gestures at L while the two of them argued.

Added the Stomper, who is heard hurling vulgarities in the video: "I told him, 'Why, your bike big means I have to give way to you is it? How fast you want me to drive?'

"I'm not sure what he replied but he anyhow pointed at me and was challenging me.

"I feel that he didn't have to swerve towards me, he could have just braked when I was changing lanes or given way."