Motorcyclist on drugs who rode into AMK void deck and assaulted 3 police officers gets jail, caning 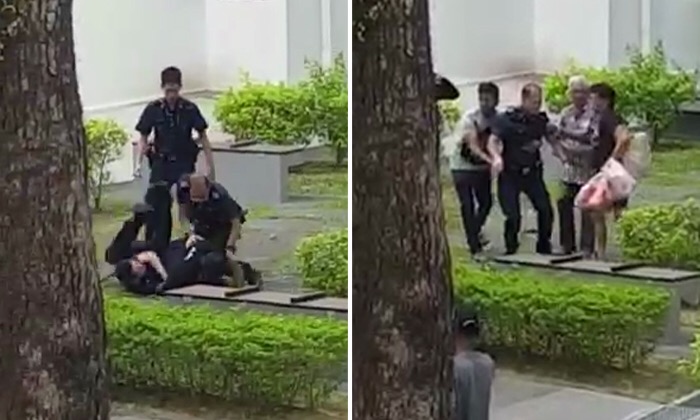 A man who went on a rampage under the influence of drugs and resisted arrest, which resulted in the three police officers sustaining injuries, was sentenced on Wednesday (May 23) to eight years and two months in jail, as well as six strokes of the cane.

Four other charges were also taken into consideration during the sentencing, reports The Straits Times.

For hurting a public servant in the course of his duty, as well as rash driving, Ampalagam was given 14 months’ jail, which has been added to his jail term.

During the incident which happened at 9am on Aug 4, 2017, an officer suffered bleeding in his brain after getting shoved to the ground by Ampalagam, while another fractured his left thumb.

The court heard that earlier in the day, a resident alerted the police to a man riding his motorcycle at the void deck of Block 406 Ang Mo Kio Avenue 10.

Senior Station Inspector Guok Joong Yin, Corporal Galvin Tey and Special Constable Hung Yung Wei were dispatched to the scene and found Ampalagam sitting on his motorcycle at the void deck, with its engine still running.

When the officers asked Ampalagam to turn off the engine, he ignored them and revved it instead, attempting to ride away.

In the process, he almost collided with Cpl Tey, before losing control of the motorbike and crashing into a concrete bench.

Ampalagam tried to flee after the collision but was caught by the three officers.

He hit Cpl Tey on his left hand and arm as he struggled to escape.

Ampalagam also shoved Senior Station Insp Guok on the chest, who fell down and hit his head, losing consciousness momentarily.

Special Constable Hung suffered a bruise in his mouth after he was punched in the face by Ampalagam.

Ampalagam was subsequently arrested and the officers found a packet of substance, which was later determined to be morphine, in his bag.

His urine samples tested positive for morphine, and he confessed that he had taken it a day before.

Due to his actions, Senior Station Insp Guok suffered brain contusions and was placed on 23 days of medical leave.

Cpl Tey’s left thumb was fractured and he was given one week of medical leave.

The court heard that Ampalagam has a history of substance abuse, and had been placed under compulsory supervision for two years in June 2016.

He was supposed to go for monthly urine tests but did not turn up 13 times.

He did not provide any valid reasons for his absence either.

Ampalagam’s lawyer, A. Revi Shanker told the court that his client had been under the influence of drugs at the time of the incident, citing that he had not meant to hurt the officers.

However, during Amalgam’s sentencing, District Judge Shaiffudin Saruwan said: "You cannot use intoxication to excuse your actions.”

He added: “It's very fortuitous that not more serious injuries were suffered by the police officers.”

For the misuse of drugs, Amalgam could have been sentenced to seven years’ jail and six strokes of the cane.

For voluntarily causing hurt to a public servant, he could have been jailed seven years’ jail and fined or caned, or both.