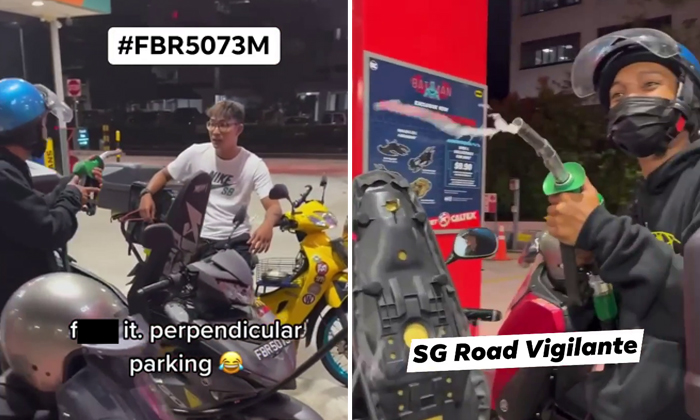 A motorcyclist has sparked backlash after he was caught on camera clowning around with his friend at a petrol kiosk.

Facebook page SG Road Vigilante posted a video of the incident that occurred at a Caltex petrol station, located at Jurong West Avenue 1, on December 26.

The video was originally uploaded by a TikTok user, but has since been taken down from the social media platform.

In the video, the motorcyclist is seen aiming a petrol nozzle at his friend, who is seated on a bike. He bursts out laughing upon realising he is being filmed.

The motorcyclist then squirts petrol out of the nozzle.

He is also later seen chasing after his friend on the road while holding a helmet.

The video has sparked outrage among netizens, many of whom slammed the two youths for potentially starting a fire. The pair have also been called "stupid" and "immature".

One user commented: "Childish and dangerous act. Brainless and safety hazard especially in (a) petrol kiosk."

Another added: "Remember to thank your moron friend who took the video and upload in social media. Stupidity has no boundaries."

A netizen also said: "They never see the danger... (they) should be arrested and charged with mischief."