Motorcyclist knocks into rear of car and flees, then hits bus moments later 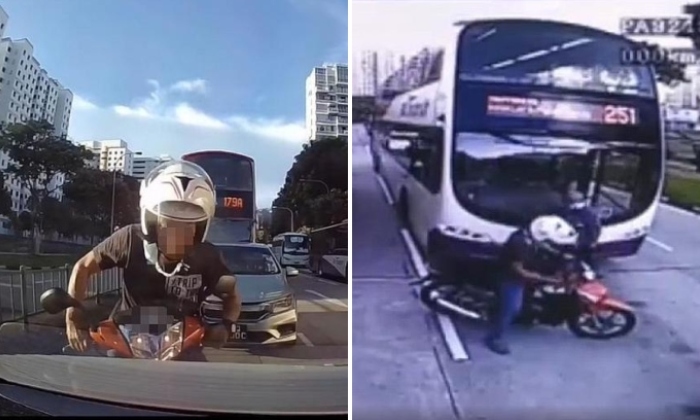 He was on his way home after buying dinner from Jurong Point on Tuesday evening.

As he prepared to make a U-turn along Jurong West Street 63 at about 6pm, he heard a bang from the back.

The driver, who wanted be known only as Mr Koh, told The New Paper that when he looked through his rear-view mirror, he realised a motorcycle had collided into his car.

Mr Koh, 30, said: "It was the first time in 10 years of driving that I had been rear-ended, but I knew I needed to take photos for evidence."

He said he exited his car and claimed he smelled alcohol on the rider. The rider dismounted and proceeded to wipe the paint from his motorcycle that had ended up on Mr Koh's car.

He then mounted his motorcycle and took off.

Mr Koh said: "I was shocked. He had the audacity to make a rude gesture at me and ride away without saying anything."

Mr Koh then drove to a nearby car park and reported the incident to the police.

On the advice of this friends, he posted the video of the incident taken from his car camera on SG Road Vigilante's Facebook page.

In response to the video, a man contacted Mr Koh the next day saying that a private bus he owns was allegedly hit by the same motorcycle.

From the timestamp on a video taken from the bus and later posted on the same Facebook page, Mr Koh realised the accident occurred a few minutes after his.

In the video, the rider can be seen zigzagging in a narrow space between two buses - one of them an SBS bus - before colliding into the second private bus.

The impact causes the rider to fall shoulder first onto the road.

As two men exit the buses, the rider can be seen picking his motorcycle up and riding away.

No injuries were reported and investigations are ongoing.