Motorcyclist knocked off bike after crashing into taxi on AYE 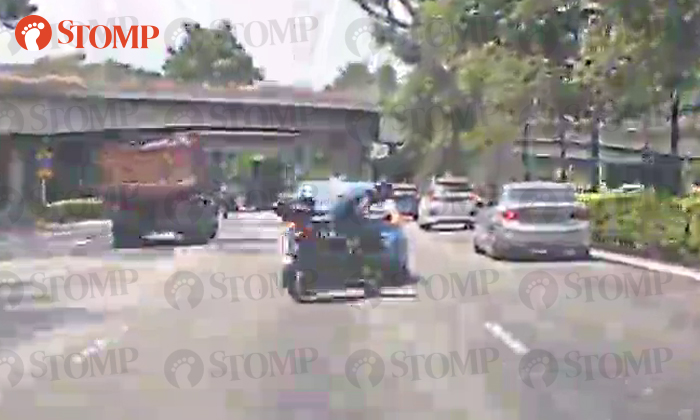 A man was seen getting knocked off his motorcycle after colliding with a taxi along the Ayer Rajah Expressway (AYE) last Friday afternoon (Aug 16).

Stomper Safe, who witnessed the accident at around 12.07pm, submitted a video to Stomp.

He said: "I was travelling along AYE towards Alexandra when I saw this a ComfortDelGro taxi abruptly changing lanes without signalling. He went from the first lane to the second lane.

"A motorcycle can be seen travelling behind the taxi.

"I don't know why but the taxi appeared to brake suddenly, causing the motorcyclist to crash into it.

"Fortunately, I managed to slow down and stop in time or I would have hit the motorcycle too."

In the video, the motorcyclist can be seen getting up from the road and righting his bike after hitting the rear of the taxi.

He then rode towards the taxi to speak to the cabby, who had alighted from his vehicle too.

The Stomper added: "I pity the motorcyclist but he didn't seem injured.

"You can see the taxi driver touching the motorcyclist on his arm to check if he was all right."

Related Stories
28-year-old man falls off motorcycle after getting hit by car at Old Tampines Road junction
Ouch! Motorcyclist crashes into car and hits taxi at Simei Avenue
How motorcyclist reacted to cabby who flashed middle finger on BKE will make you LOL
More About:
biker
motorcyclist
taxi
accident