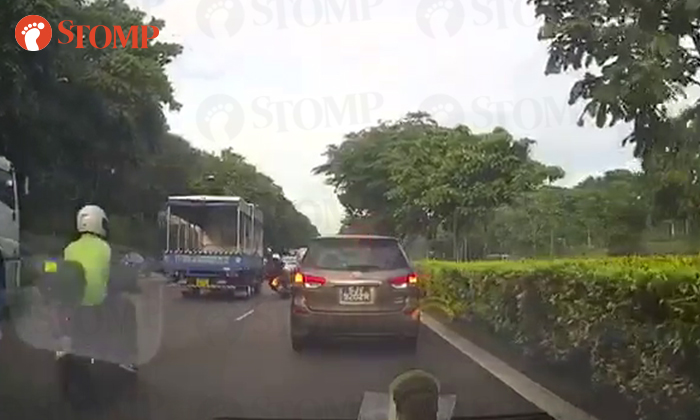 A 48-year-old motorcyclist died after he suddenly fell onto the road and got run over by a lorry along Kranji Expressway (KJE) on Wednesday morning (Oct 23).

A video of the accident was published on Facebook group SG Road Vigilante.

From the video, the motorcyclist can be seen riding in the middle of two lanes before he falls onto the road.

The lorry on the left is then seen running over the motorcyclist.

Stomp has masked some parts of the video due to its graphic nature.

Stomper Lim contributed a video of the accident's aftermath as he went past.

In the video, a blue tent can be seen on the road.

Lim told Stomp: "I passed by the scene of the accident at about 8.30am. I was coming from Choa Chu Kang Way and going towards Pan Island Expressway when there was a huge traffic jam.

"My driver said that there was an accident and I was stuck in the jam for almost an hour."

Responding to a Stomp query, the police said: "At 7.26am on Oct 23, the police were alerted to an accident involving a lorry and a motorcycle along KJE towards PIE.

"The motorcyclist, a 48-year-old man, was pronounced dead by paramedics at the scene.

"The lorry driver, a 33-year-old man, is currently assisting with police investigations."