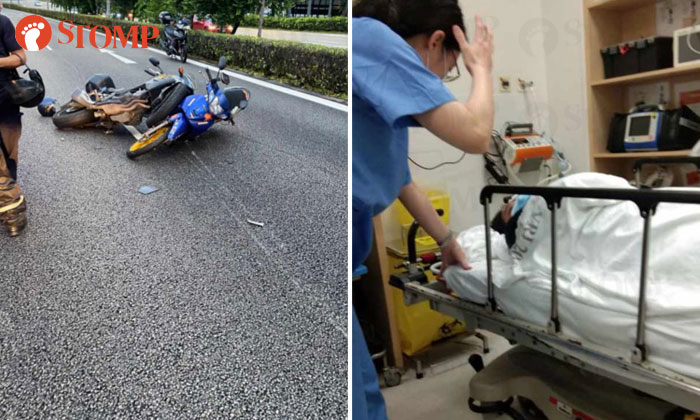 A 30-year-old motorcyclist was taken to hospital after the bike he was riding was involved in a hit-and-run accident with one other motorcycle and a car along the Pan Island Expressway (PIE) towards Tuas on Sep 11.

A Stomper alerted Stomp to the incident and shared a video showing what happened.

In the video, a motorcycle is seen being sideswiped by a car before skidding in front of another motorcycle, causing its rider to fall to the road as well.

The car continues without stopping.

In response to a Stomp query, the police said they were alerted to the hit-and-run accident at 6.29am.

The Stomper told Stomp the accident victim is his friend, a Malaysian who was on his way to work.

The incident happened close to exit 15 on the PIE.

The Stomper is appealing for witnesses who can identify the licence plate number of the car involved.