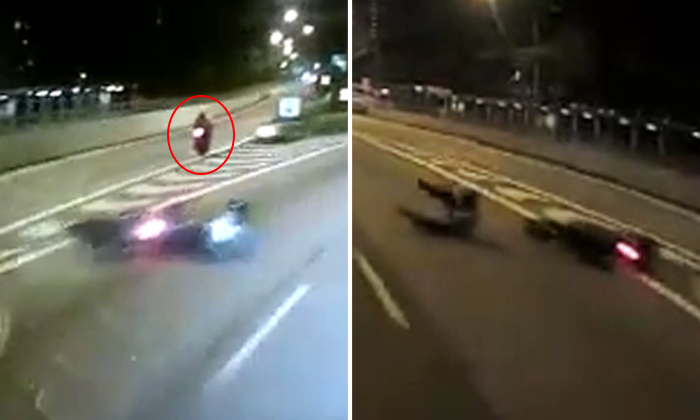 A 54-year-old motorcyclist suffered multiple injuries in the wee hours of Monday (May 21) after getting hit by another biker, who left the scene instead of stopping to help.

Facebook user Belz Hermann, who is the victim's son, shared several videos of the incident that occurred along the Tampines Expressway (TPE), towards the Anchorvale Road exit, at around 4.17am.

The victim, who is a SATS employee at Changi Airport, had been on his way home from work when the accident took place.

When contacted by Stomp, Belz said that the videos were taken by a passing van driver who had stopped to assist his father.

The clips show how a biker had side-swiped Belz's father while trying to enter another lane, causing the latter to fall off his motorcycle.

"After you hit my dad's motorcycle. You never even [stopped to check] but you run off," Belz, a 33-year-old freelance mural artist, wrote in his post on Monday night.

According to Belz, the van driver then took his father to Khoo Teck Puat Hospital.

"My father sustained very bad abrasions and deep cuts on a few areas such as both of his palms and knees, as well as deep cuts on the legs that has limited most of his movement," Belz told Stomp, adding that a police report was made on the same evening.

Belz is appealing for anyone with information about the hit-and-run biker to come forward.