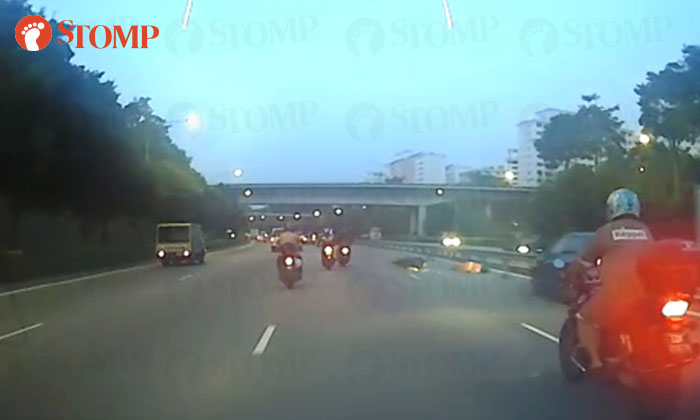 A motorcyclist was thrown off his bike after hitting what was said to be a huge rock along the Kranji Expressway.

Stomper Shaiful alerted us to the incident, which was said to have occurred yesterday (Feb 8) at around 7.05am just before Choa Chu Kang exit.

Shaiful was driving to his workplace when he saw a huge rock on the road, which he suspected was debris that came from a tipper truck.

He told Stomp, "The rock was at least the size of an A4 piece of paper."

The Stomper also said that the motorcyclist was travelling at a slow speed when the accident had occurred.

In the video that he sent, the motorcyclist can be seen rolling on the ground as he was thrown off his motorcycle.

"He kept on rolling like a dead fish. I think he was unconscious," said Shaiful.

He then told his friend, who was in the car with him, to call the police.

"Wish the rider a speedy recovery," added the Stomper.

In response to media queries, the police said that the 32-year-old motorcyclist was unconscious when conveyed to Khoo Teck Puat Hospital.