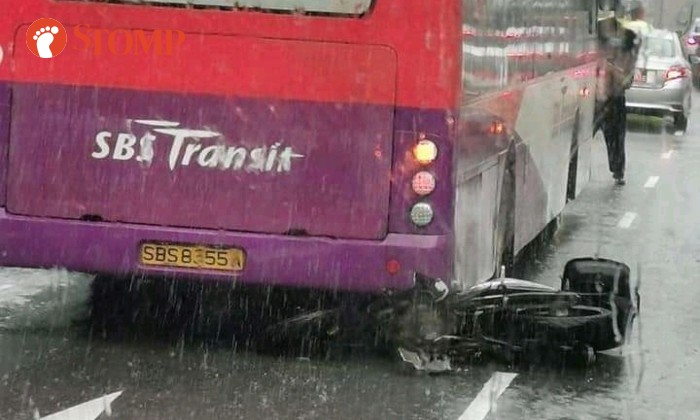 A motorcycle crashed into the rear of a stationary SBS Transit bus (Service 123M) along Lower Delta Road on Friday (Sep 4) at 3pm.

A Stomper alerted Stomp to the accident, which occurred while it was raining, and sent a circulated photo of what happened.

Some photos of the accident were also posted online on the Singapore Roads Accident Facebook group.

In the photos, a motorcycle can be seen pinned under an SBS Transit bus.

The roads also look wet and slippery due to the torrential downpour.

In response to a Stomp query, Ms Tammy Tan, Senior Vice President of Corporate Communications at SBS Transit said: "On Friday (Sep 4) at about 3pm, Service 123M was stationary at the traffic light along Lower Delta Road when it was hit in the rear by a motorcycle.

"Our bus captain quickly attended to the motorcyclist and informed the Operations Control Centre who activated an ambulance.

"The motorcyclist received medical attention at the scene and declined to be conveyed to the hospital."