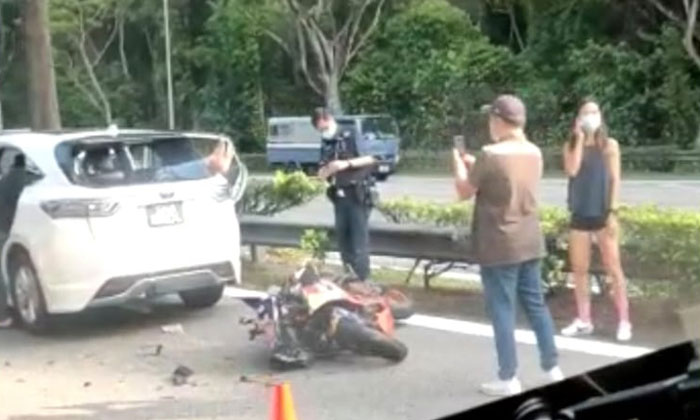 A motorcyclist and his pillion rider were taken to hospital after an accident involving a motorcycle and car along the Pan Island Expressway (PIE) towards Tuas on Wednesday morning (June 9).

In response to a Stomp query, the police said they were alerted to the accident at 8.57am.

"The 35-year-old male motorcyclist and his 28-year-old male pillion were conscious when conveyed to the hospital," a police spokesman said.

Several Stompers alerted Stomp to photos and a video circulating online of the incident.

They show a motorcycle on the road behind a car.

A person's legs are seen sticking out from the rear windscreen of the vehicle.

Another person is seen lying on the road in front of the car.

The accident happened just 200 metres away and 14 minutes after a fatal accident occurred on the PIE towards Tuas.

In that incident, a 52-year-old male motorcyclist was pronounced dead at the scene by a paramedic and his 42-year-old female pillion rider was unconscious when taken to hospital where she subsequently died from her injuries.