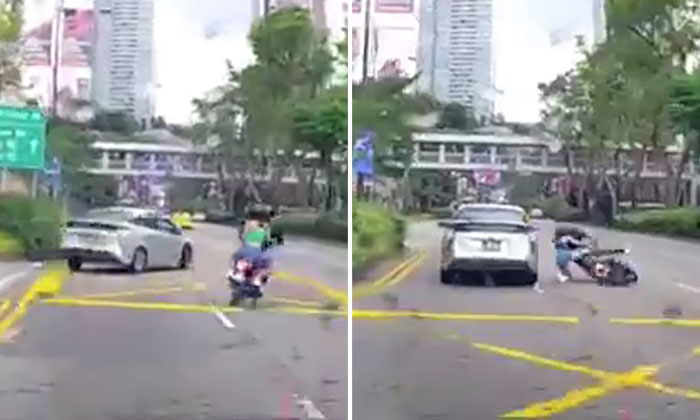 A motorcyclist and his pillion rider were sent skidding after the rider tried to avoid a car turning left onto Scotts Road.

The incident was recorded on a vehicle's in-car camera and posted online by Facebook user Felicia Tong. It is unclear when this happened.

In the video, the rider is seen travelling in the middle lane towards Far East Plaza when a car turning left from a side road causes the rider to swerve.

He loses control of his vehicle and he and his female pillion rider are seen falling onto the road.

Another motorcyclist immediately stops behind the fallen bike and starts directing traffic around it.

The pillion rider is seen walking to the side of the road before crouching down.

Passers-by approach her to make sure she is all right.

Netizens are divided on who is at fault.

Some think the car driver should have stopped and waited for both the first and second lane to be clear before turning.

Others think the rider should not have been riding so fast and should have been more alert.