Motorcyclist and pillion rider, both 18, taken to hospital after head-on collision with car 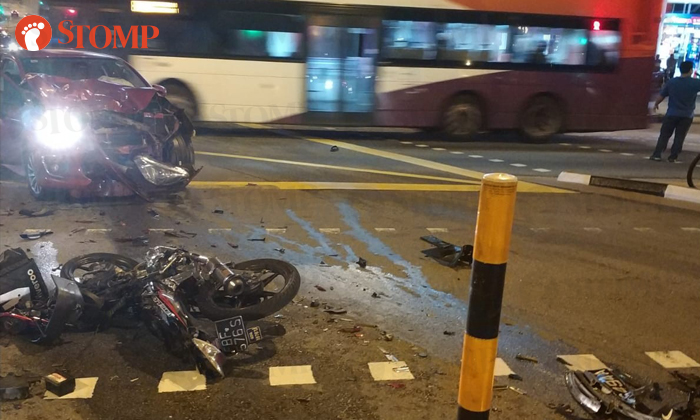 Two men, both aged 18, were taken to hospital after an accident involving their motorcycle and a car in Pasir Ris on Friday night (Nov 29).

Responding to a Stomp query, the police said they were alerted to the accident at the junction of Pasir Ris Drive 1 and Elias Road on at 11.41pm.

Stomper Rosita shared photos that her husband had taken at the scene, showing the car with its front bumper badly damaged and a mangled motorcycle lying on the road.

She said: "My husband and a few of his buddies heard a loud bang from our condo.

"They went out to take a look and realised that an accident had happened.

"It was a head-on collision.

"The pillion rider flew into the air and landed on the pavement.

The group of witnesses then called the ambulance.

The motorcyclist and pillion rider were conscious when taken to Changi General Hospital.