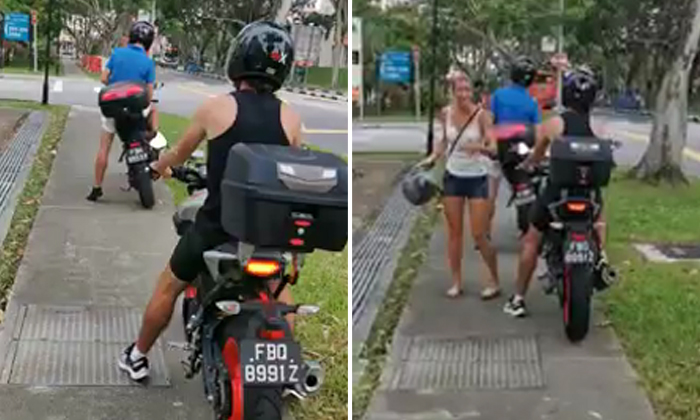 A jogger got into a dispute with a group of three people after he called them out for riding their motorcycles on a pedestrian walkway in Bishan.

Facebook user Francis Ong posted a video of the incident that occurred along Bishan Street 22 on Tuesday (Apr 14), at around 5.45pm.

The group, which consisted of two men and one woman, had apparently been riding two motorcycles on the pavement near The Salvation Army.

In his post on Wednesday (Apr 15), Ong said he had been doing his run towards Bishan-Ang Mo Kio Park when he came across the trio riding on the pavement.

He wrote: "I let them know they should not do that and received a very rude and loud reply that "it is only one minute" followed by a "f*** off".

"While I wanted to record [a video] to make a report, the bike at the back started to reverse towards me in a threatening manner.

"The woman claimed they were there to drop off donations for The Salvation Army and that it was more convenient to drive up the pavement."

According to Ong, there was a carpark "just 20 metres away" but the woman had claimed that she did not know the way "even though it was fully visible".

Ong acknowledged that the woman was "not too rude" but slammed the two other motorcyclists.

In a 17-second video posted by Ong, one of the motorcyclists can be seen backing towards Ong while he was recording the incident.

Ong can also be heard saying: "If you are a rider, you should find your way. You shouldn't take the most convenient way."

Related Stories
Uncle stops e-bike user from riding on cycling path even though it's not illegal, gets called 'donkey'
Delivery riders in dispute with elderly man at Tiong Bahru Park share their side of the story
PMD rider honks at pedestrian and scolds him for not giving way: 'We must share the path'
More About:
dispute
motorcycle
biker
pedestrian