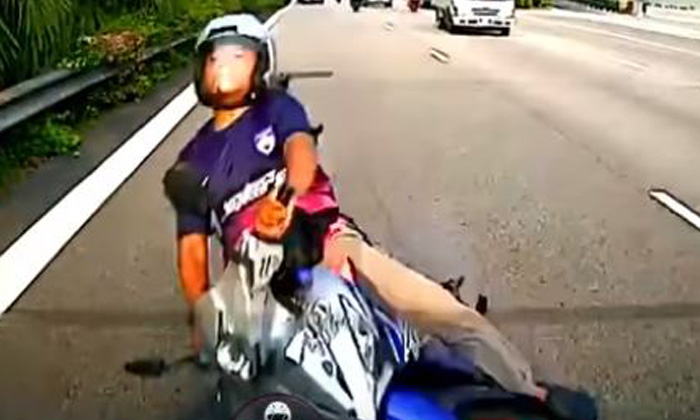 A video of a motorcyclist falling on the road after getting swiped by another motorcyclist along the Tampines Expressway (Pan-Island Expressway) at about 8.30am yesterday (Oct 3) has caused netizens to come out and wrongly label the incident as a hit-and-run.

Stomper Jayden, however, alerted Stomp to an update regarding the video showing the other motorcyclist actually returning to render his assistance to the fallen biker.

The original video footage posted on Beh Chia Lor - Singapore Road showed a motorcyclist losing balance of his motorcycle, falling on the road and hitting the back of a car after another motorcyclist swiped into him while he was travelling on the first lane of the expressway.

The video was taken from the in-car camera of the car in front.

The motorcyclist was then seen riding away and leaving the biker on the road, before the video cuts off.

Before the video was updated, netizens were critical of the motorcyclist who drove away.

"Rushing for what? Hit bike and yet run away. Don't even bother to help. I think he also frightened."

However, opinions of the accident changed once the update was up.

"Today (Oct 4), the group updated the video appending a new footage that shows the accused actually went back to help the fallen rider," said Stomper Jayden.

"It wasn't a hit and run after all.

"That's a surprising twist, more so when we see he rode back to help against traffic!"

Facebook user Mohammad Hafiz Pakri also added: "Watch until the end of the video. He came back, by riding against the flow to help."

The video was later updated to a longer version and uploaded to Facebook page SG Road Vigilante - SGRV, after the original poster of the video shared a footage of what happened after the accident in the comments section of the video.